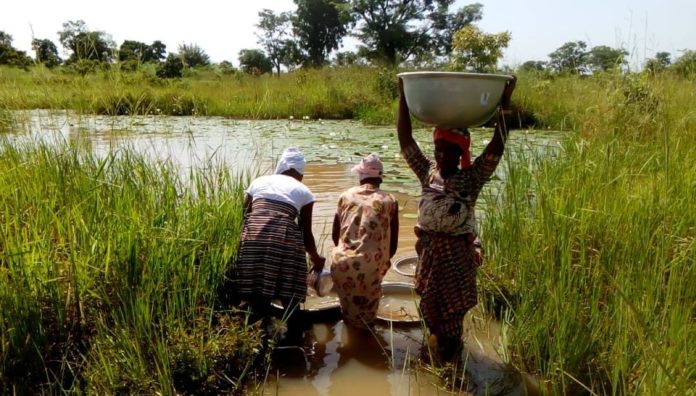 Residents of Zanko Paani Community near Siriyiri in the Wa West District, have appealed to the Ghana Water Company Limited (GWCL) to help solve the water crisis in the community.

They said they currently resort to pond water for domestic purposes such as cooking and drinking as the only borehole in the community had also broken down.

Madam Iddrisu Marriama a resident of the Zanko Paani community told the Ghana News Agency (GNA) in an interview that they were aware of the health risk associated with drinking from the pond but they had no option.

She said the population of the community overweighed the single borehole there, which caused it to easily break down due to the excessive pressure on the facility.

“You have come to see our problem, our borehole breaks down often, so we fetch water from this pond…we are sharing this pond with animals.

“I have been having stomach pains. I know it’s because of the water but there is nothing I can do,” she said.
Mr Iddrisu Daluo, another resident said they have been contributing almost every month to fix the borehole, which had brought unnecessary financial pressure on the people.

According to him, they needed about GHC600.00 to fix the borehole to enable them to draw water from it.
Mr Daluo, however, noted that they were finding it difficult to mobilise the funds to carry out with the maintenance works on the borehole.

The residents, therefore, appealed to the government, the GWCL, the Community Water and Sanitation Agency, (CWSA) and benevolent Non-governmental Organisations to come to their aid by providing them with a source of potable water.

Meanwhile, Mr Osman Adams, the Assembly Member for Guo Electoral Area, told the GNA that he had written letters to the GWCL and an NGO fort support but had not had any positive response.

Mr Adams admitted that the single borehole for the community was woefully inadequate, saying, it needed about two boreholes to help meet the water need of the people.

“The community is fast growing because it is close to Wa. A lot of people are coming to settle here and we need to increase our amenities to meet the growing demand”, he added.

GWCL refutes claims that water from the Company is contaminated