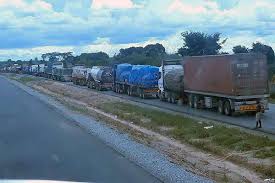 The Zimbabwean government said Wednesday that it was trying to find ways to ease massive congestion at Beitbridge Border Post as thousands of citizens return home for the festive season.

Pictures of chaotic scenes are being shown on social media as motors have formed multiple queues, especially on the South African side of the border post, leaving many travelers stranded.

Government spokesperson Nick Mangwana said the government had been made aware of the situation at the border post and would find ways to ease the problem.

“We have been made aware of the situation at Beitbridge Border Post. Whilst the bottleneck is not on the Zimbabwean side, efforts are in motion to arrive at a solution that works for both sides of the border, that includes a possible review of the 10 p.m. closure of the border,” he posted on Twitter.

Zimbabwe closes the border at 10 p.m. in line with a curfew imposed in South Africa to curb the spread of COVID-19.

Thousands of Zimbabweans flock back home from their work stations in South Africa during the festive season.

Health checks to ensure that travelers are not infected with COVID-19 are also slowing down movement, amid reports that some travelers are also submitting fake certificates, indicating that they tested negative for the virus. Enditem