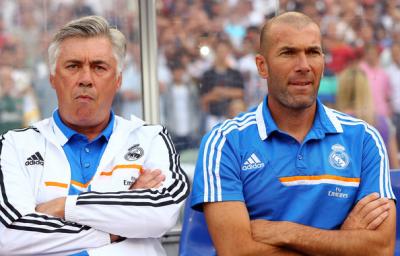 Real Madrid legend Zinedine Zidane has urged President Florentino Per?ez to tie head coach Carlo Ancelotti down to a long-term contract.
Since arriving at Santiago Bernabeu in 2013 the Italian has won four trophies, including last season?s historic 10th UEFA Champions League.
The Italian is halfway to ending a two-year wait for a Liga title with Real sitting top of the table by one point, with a game in hand over second-placed Barcelona.
The 55-year-old?s current deal lasts un?til June 2016, but Zidane – who coaches Real?s ?Castilla? second team – believes that should be extended before other clubs come calling for his services.
?Carlo is very important to the team and is the best possible coach for Madrid,? the former France international said.
?I?m not surprised at how he has gone about things because he?s very profes?sional and knows what he wants.
?I?d renew his contract right now be?cause he is someone who gets on with this group of players very well.
?He has a clear vision and handles the players well, which is the biggest challenge these days. He knows how to get things across and talk to people.?

Parents Urged To Instill Cultural Values Into Their Children