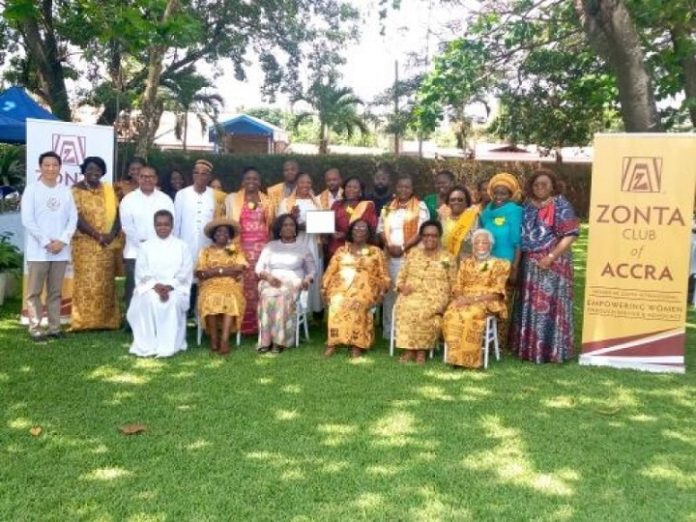 The Zonta Clubs, Ghana on Sunday, chartered a new club, called “Zonta Club of Accra Jubilee” into its Ghanaian Clubs to reinforce its mandate of advocating to protect and secure the welfare of vulnerable women and girls.

The Club, made up of 16 members, from varied professional backgrounds, was an addition to the members of the Club in Ghana, namely the Zonta Clubs of Accra, Accra II, Accra Metropolitan, Tema, and E-Club, and its chartering marked the end of the golden jubilee celebration of the Club in Ghana.

The Club, also joined Zonta International, to celebrate the 101 anniversary of dedication, advocacy, and service to advance the status of women and girls.

Mrs Emi-Beth Aku Oyemam Quantson, President of the Zonta Club of Accra Jubilee, on behalf of the new club accepted the mantle and gave an assurance to make a positive change to complement the long-term achievements of the Club.
She expressed gratitude to the leadership of the other Clubs for their guidance and support to ensure that her Club had enough members with a passion for service to humanity.

The Jubilee Club, she said, as part of their planned activities after the chartering was to embark on a project in deprived communities like Chorkor, a community in Accra.

As a community with about 78,918 population and rising cases of child marriage, she said the project sought to educate residents in Chorkor on child marriage and its effects, teenage pregnancy, and alcohol and drug abuse to enable them to be aware of the numerous health and developmental consequences they carried.

Mrs Quantson referring to a UNICEF report, said among every five girls in Ghana between ages 20 to 24, one was married before turning 18, a situation that led to an increasing rate of teenage pregnancies, school dropouts, and maternal mortality.

“We will, therefore, embark on an advocacy campaign through education, sexual reproduction educations, and establish scholarship schemes for them to enable them to unleash their potentials,” she said.

Mrs Georgina Theodora Wood, a member of the Council of State, who addressed the members of the Club as a Guest of Honour, commended the Club for its efforts in breaking the barriers to women attaining leadership positions with a sustained effort to propel them to strive for crucial positions in nation-building.

The promotion and protection of rights of women and the girl child in underserved communities, she said, was a shared responsibility that required a collective effort including that of men to break the myths and stereotypes surrounding injustices against them.

Mrs Wood, also a former Chief Justice, commended the Club for its full potential to promote liberty and eradicate fear among women, saying, their work would be duly rewarded.

Mr Pakwo Shum, the Managing Director of Aviation Alliance Limited, another Guest of Honour said nearly four out of every 10 business owners in Ghana were women, adding that women excelled in everything they engaged in ranging from health, agriculture, space works to theology.

“Every man should be a feminist and I am proud to be one. My words are not born out of pity but from the fact that women deserve to be respected and given equal opportunity as men,” he said.

He said injustices meted against women and girls such as tagging them as witches among others, were bad and ought to be condemned with all seriousness.

He, therefore, called for more education and stricter enforcement measures from various governmental departments and agencies and nongovernmental organisations to drastically reduce the unfair treatments against women.