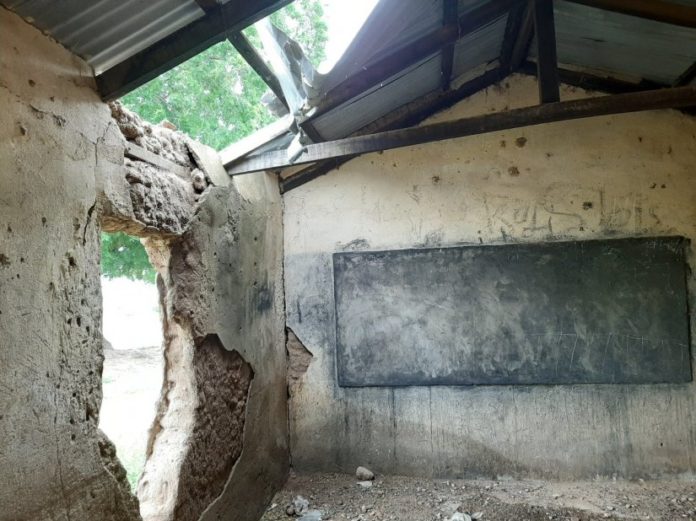 The Zuabuliga Upper Primary School in the Pusiga District of the Upper East Region is in a deplorable state with portions of the roof ripped up.

The school structure which looks weak was built in 1992 and houses 400 upper primary pupils.

When the Ghana News Agency (GNA) visited the community, it observed that the three-unit classroom block had deep cracks and the entire block including the floors, windows, and doors were in a deplorable state.

Assembly Member for the area, Mr Awande Akudbilla Mamudu in an interview with the GNA at the premises of the school, said “We complained on several occasions about the situation of this school, but nothing has been done.”

“This time we are appealing to philanthropists, individuals, and non-governmental organisations to help us put this building back in shape. It is now a death trap to pupils in this community.”

He said but for the “blessings of COVID-19” which interrupted academic activities of schools nationwide, contact hours in the school would have been interrupted during the present rainy season.

He said for fear of a possible collapse of the structure on pupils, school authorities held class sessions under trees, “Because of the nature of the building, some parents have sent their children to other communities to attend school.”

Mr Mamudu said the situation of the school was unfortunate, adding that stakeholders, especially politicians in the area were aware of the poor condition of the school but had over the years played politics with it.

Mr Daniel Abugri, a concerned member of the community said they were worried about the situation of the school and stressed that “The structure is virtually collapsing, it has become a death trap.

The student population keeps reducing because many parents are afraid to allow their children to sit under it. We are passionately appealing to the government and NGOs.

The Junior High School is dying because the Primary School is not able to feed it,” he said.
Mr Abugri said the poor conditions of the upper Primary compelled most pupils to drop out of school after lower primary education to protect their lives, “We are in dire need of a six-unit classroom block,” he added.

The lower block of the Primary school which was built in 2004 under the HIPC initiative, was also gradually deteriorating as doors and windows were broken, exposing the structure to animals.

However, the Junior High School block was the only structure in good shape in the area.