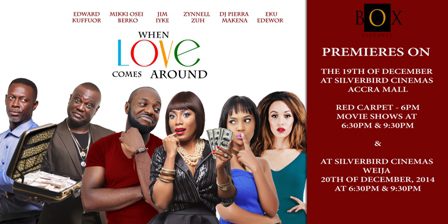 Actress Zynnell Zuh will be premiering her first produced movie, When Love Comes Around, come December 19 at the Silverbird Cinemas in Accra. The beautiful actress is the latest to join the likes of Yvonne Nelson, Yvonne Okoro, Nadia Buari and Lydia Forson among other actresses who have produced their own movies.
The new movie tells the story of Love, played by Zynnell Lydia Zuh.

After an early heartbreak, Love grows up not believing in true love. Money and social status have become her criteria for the search for her dream man. But just when she finds her dream man, true love comes knocking.
With a strong Ghanaian and pan-African cast, When Love Comes Around is an excellent first time effort from Zynnell Zuh as a producer and a co-writer.
The movie is already being tipped as one of the best movies of the year with seven Ghana Movie Award nominations including Best Picture, Best Cinematography and Best Script.

It also picked two nominations in the categories; Best Script and Best Overall film of 2014 for Africa Magic Viewers Choice Awards (AMVCAs).
It was directed by Afe Olumowe who penned hits like Chelsea and directed the critically acclaimed thriller The Voice.
It stars Jim Iyke, Zynnell Zuh, Mikki Osei Berko, Edward Kufuor, Eku Edewor, DJ Pierra Makena and a host of others.