Assistant Commissioner of Police Martin Ayih, the Commanding Officer of the Central Motor Traffic and Transport Department, has urged the Accra Metropolitan Assembly (AMA) to be innovative and create satellite markets for its street traders.

He said this necessary because the street traders were now the principal cause of traffic in the Accra Central Business District.

He said in other jurisdictions across the world, there are specific days set aside for street markets but this is unlike the situation in the Accra Central Business District where street hawking traders have now become a permanent concern impeding the flow of goods.

Speaking in an interview with the Ghana News Agency, ACP Ayih said, the city authorities can’t exonerate itself from the traffic chaos in the Central Business District if it continues to take tolls from wrongly situated hawking traders.

“Initially they were hawkers on the streets, but cast your eyes round and you would realize that these are not hawkers but traders who have situated themselves permanently on the pedestrian walkways and quite often on sections of the main street,” he said.

He said this, besides the coronavirus pandemic is the major concerning affecting effective policing in the central business district adding “it is a health matter and a development concern for all to deliberate”.

ACP Ayih said as an officer of the law, when you ask such traders why they have situated themselves on the streets, they say they have been given the permit by the city authorities to do so.

“We have had a series of discussions with the city authorities who have indeed urged us to arrest defaulting traders; but we do arrest them, send them to court, but in a short while they are back on the streets displaying their wares for sale.”

ACP Ayih said this situation has gradually affected the traffic situation as many two-lane roads have now become a one-lane roads and the public who also patronize the wares of the traders are also encouraging an illegality which is affecting all who visit the Central Business District.

He said there is the need to create temporary markets for such traders else the fight against street selling can’t be won; and the police would be willing to drive them to the designated area for sanity to prevail. 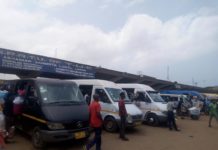