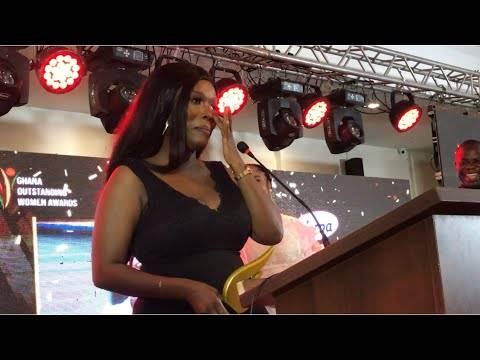 Deloris Frimpong Manso popular television host known in showbiz as “Delay” was adjudged the Outstanding Woman of the Year at the third edition of the Ghana Outstanding Women Awards (GOWA).

The 38-year-old entrepreneur beat off competition from Nana Ama McBrown, Joselyn Dumas, Cynthia Tima Yeboah, and Margaret Afriyie to win the glamorous award at a colourful ceremony held at the Alisa Hotel on Friday.

Delay also picked up the Outstanding Woman TV Personality and Entrepreneur of Year and was emotional in her acceptance speech urging other women to persist in their various endeavours regardless of their looks and background.

Special Guest for the awards ceremony, Madam Tina Mensah, Deputy Minister of Health, who received an honorary award for her role against the fight of Covid-19, urged women to do their best in their little way to change society.

She urged women in various fields of endeavours to be good examples for the young generation and aim high.

Mrs. Afua Asantewaa Aduonum, Chief Executive Officer of the Askof Productions, organisers of the event congratulated all winners on the night for the tireless effort in impacting society regardless of the numerous challenges.

“I deem it a great pleasure to recognize women who are devoted to the welfare of humanity especially in the Covid-19 era where women continue to play a significant role in the fight.

“I believe this award would further empower women as we thrive to make the society a better place,” she said.