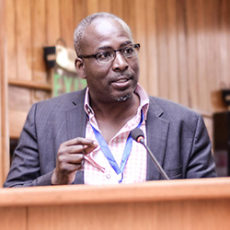 Professor Fred McBagonluri, the President of Academic City University College working with 13 others, have developed a baseline prototype of a mechanical ventilator to support the national and global efforts towards eradicating COVID-19 pandemic.

He said the team needed about GHC5, 000 to buy the medical-grid components to fix in the prototype to make it ready for testing and certification by other regulatory agencies.

Speaking in an interview with the Ghana News Agency (GNA), Prof. McBagonluri said the team had proven their concept, which included the development of a power control system that enabled it to run on electricity and could be built in 25 minutes if components were available.

Checks made by the GNA showed that a hospital-grade ventilator costs between $25,000 and $50,000 each.
Using a case of a COVID-19 positive patient, as an instance, he explained that the virus attacked the lung, a respiratory system and compromised the patient’s ability to breathe.

The Mechanical Ventilators help patients to breathe by assisting the lungs to inhale and exhale air.
Prof McBagonluri stated that the team was ready to work with the government and other regulatory agencies including; the Food and Drugs Authority and the Ghana Standards Authority to go into mass production.

“If we get the needed support we will be able to build more of these for the country. Academic City has the right technology and there are many engineering students at home so with little training we can call them to help,” he said.

Prof McBagonluri, who has 16 years of experience in medical equipment and devices in the United States of America, said his drive to work on the product was a news item that Ghana had only 67 ventilators.

“I was home bored and wondering when this pandemic will be over. Upon hearing that we have such a limited number I was alarmed that what will Ghana’s health sector respond if the number of cases increase,” he said.

He recalled that he put up a call on Facebook asking for people to volunteer to help build a ventilator which many people including students, professionals responded positively.

Prof. McBagonluri said that the school had the capability and technology to build simple technologies including; intelligent hospital beds, lift systems for patients and the development of the ventilator would be the first response to deliver a medical product.

Checks made by the GNA shows that a hospital-grade ventilator cost between $25,000 and $50,000 each.
Mr Serlorm Agbo, a member of the team explained that it provided the patient time to fight off the infection and recover by resuscitation weak alveoli in the lungs.

The ventilator also has a humidifier, which modifies heat and moisture to the medical air so it matches the patient’s body temperature.

Patients are given medication to relax the respiratory muscles so their breathing can be fully regulated by the machine.

He said the prototype had both manual and direct oxygen connections explaining that the manual one could be used in remote areas.