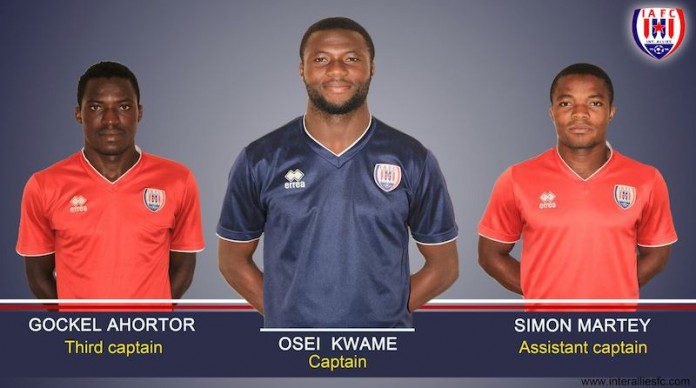 The trio of senior players- Osei Kwame, Simon Martey and Gockel Ahortor (in descending order)-have been selected as captains for the 2015/16 football season.

Osei recorded a career-best of 13 clean sheets in 27 games conceding 18 goals being the goalkeeper with the best record in Ghana Premier League last season.

He has been a regular member of the team and played vital role in helping the team to qualify from the Division One to the Premier League.

“I’ve always been a believer of the saying ‘actions speak louder than words’ and I want to set an example for everyone, not just my teammates,” he told www.interalliesfc.com

“I am very honored that the club have appointed me as the captain and am looking forward to continuing to lead our program for the season.”

Martey, another senior player of the side has been named the vice captain to assist Osei. He can play several positions on the filed and has charisma with vast experience.

“It’s a great honor to be selected to be the assistant captain for the 2015/16 season,” said Martey.

“My goals as a team leader are to set in motion a culture of hard work and commitment to our program not only for this coming season but for future.”

Known for his best ball distribution qualities, Gockel Ahortor has been named the third captain.

“I feel that I fit in well with the other two captains and I envision my role this season as being a leader on and off the field as well as being someone that any of my teammates can come to for help or advice.”

Razak Kojo Opoku Writes: 2024 Is The Right Time And Season For Dombo To Lead