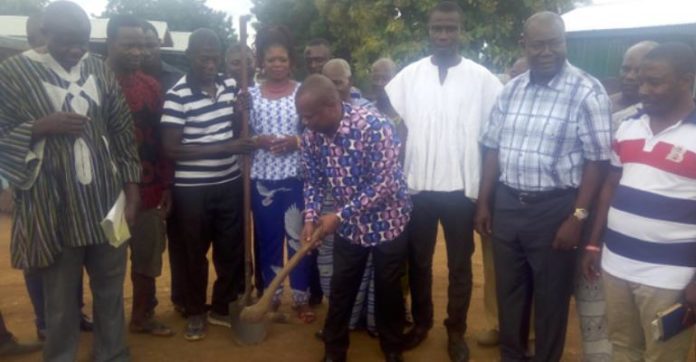 The Member of Parliament (MP) representing the people of Tain in the Brong Ahafo region, Mr. Gabriel Osei, has cut sod for the construction of durbar grounds at Nsawkaw, the District capital and Seikwa to enhance social activities in the areas.

The project, with same architectural designs is expected to be completed within the next six months is being financed by the MP from his share of MP’s Common Fund.

Addressing the Chiefs and Elders, Mr. Gabriel Osei thanked Nananom for releasing land for the Projects and the collaboration between him and Nananom since he was elected into office.

He therefore assure Nananom of his commitment to ensuring the development of the constituency by the guidance and directions from Nananom.

He mentioned ongoing projects like the construction of weighing centre at Badu Health Centre, KVIP at Brodi and the two durbar grounds as projects being funded from his share of the common Fund.

The MP said he believes in the credibility of the contractors and expects them to do a perfect job that will last for more decades for the people. He reiterated his commitment to serving the people of Tain constituency who gave him the mandate to serve them as Member of Parliament.

Okogyeaman Nana Duodu Ampem II, Omanhene of Nsawkaw Traditional Council was grateful to the MP for the project and assured him of maximum support and backing from Nananom and that all containers and kiosks around the project site will be removed as soon as possible because the construction starts immediately after the sod cutting.

Mr. Joseph Annor, the contractor said he and his team of experts together with the labourers will expedite work so that the construction would be done within the stipulated period.

Coalition of Youth Groups at Tain walks for peace

The Poverty Situation In Cocoa Growing Communities In Ghana

Residents in Sunyani Denied Water Due to Durbar Grounds Construction