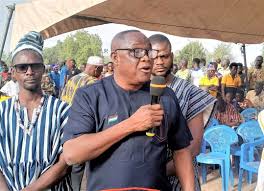 Mr Sampson Tangombu Chiragia, the Parliamentary Candidate for the National Democratic Congress has elected the Member of Parliament (MP) for the Navrongo Central Constituency in the Upper East Region.

Delivering his victory speech after he was declared winner of the Parliamentary election by the Electoral Commission, Mr Chiragia said he expected the victory he got, and attributed his win to good human relations and love for his constituents.

“We did our best, we love everybody, and we preached unity because Navrongo is bigger than individuals. We want Navrongo to be united as one, it is the only town we have,” Mr Chiragia, who is affectionately called STC said.

“This victory is for all, so we are going to come together and plan for the way forward. What do we do, how do we help those behind us,” Mr Chiragia said.

He also congratulated his close contender, Madam Tangoba Abayage of the New Patriotic Party, saying “She did her best and I congratulate her for good work done. We were not expecting her to get 10,000 because we knew what we were doing.

“We were more on the ground than her, but she did a good job, I congratulate her very well, she has done well. Better luck to her next time,” he said.