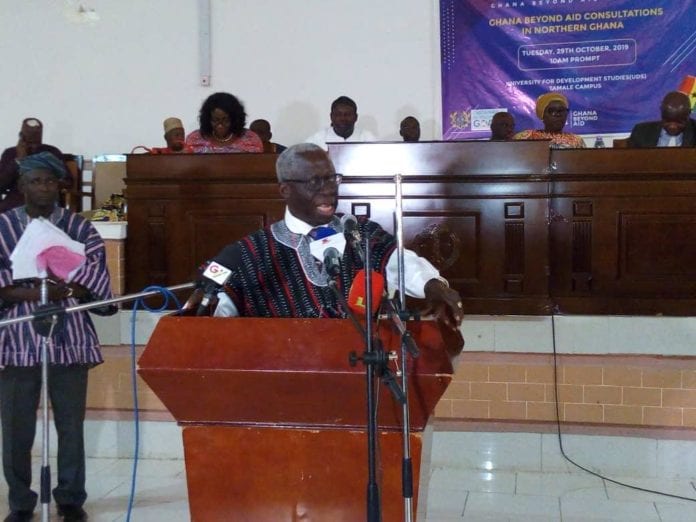 Mr Yaw Osafo-Maafo, Senior Minister at the Presidency, has said Ghana cannot continue to depend on foreign donor support to cushion its fiscal annual budgets.

He said it was vital for the country to locally harness its resources both human and natural and effectively fuse them into workable strategic plans and draw a roadmap for the country’s development.

The Senior Minister called on stakeholders and citizens in the Northern Region to support government’s vision of a ‘Ghana Beyond Aid’ to help bring about the needed socio-economic development in the country.

Mr Osafo-Maafo said this in Tamale at a stakeholder consultations forum on the Ghana Beyond Aid (GBA) policy.
The forum was held to educate the stakeholders on the GBA as well as solicit and harness their views and concerns on how to improve on the ideas, plans and strategies adopted by government in connection with the agenda to free the country from depending on foreign loans for its development.

The Ghana Beyond Aid is a national and non-partisan initiative of government, which aims at helping to ensure effective harnessing of the country’s resources and deploying them effectively and efficiently for rapid economic development and social transformation.

Mr Osafo-Maafo said the country’s continuous dependence on aid could not be a source for sustainable development in the country, hence the need to establish concrete mechanisms for a more and better sustainable alternative for achieving Ghana’s development agenda.

Stakeholders at the forum included some security officials, political party representatives, traditional and religious leaders, Metropolitan, Municipal and District Chief Executives, Staff of the University for Development Studies among others.

Mr Osafo-Maafo, who is also the Chairman of the ‘Ghana Beyond Aid’ Committee, said aid is not value neutral and the country must be extra smart not to pin all its hopes on it.

He said the country is blessed with lots of resources such as gold, diamond and bauxite. However, he said, it remains poor in the delivery of quality services such as healthcare, education, and the provision of roads and infrastructure among others.

He said the government’s vision of Ghana Beyond Aid was a call on citizens to collectively help in ensuring a Wealthy, Inclusive, Sustainable, Empowered and Resilient (WISER) Ghana.

He called on Ghanaians to change their attitudes towards work by being patriotic, disciplined, honest as well as have respect for the rule of law in order to bring about improved productivity.

Mr Salifu Saeed, the Northern Regional Minister, gave the assurance that citizens in the region were ready to support the GBA to succeed.

Some of the participants suggested to the GBA Committee to take into consideration measures to ensure the sustainability of the natural resources to benefit current and future generations.
They also called for the enforcement of the rule of law to ensure safety and effective security in the country.