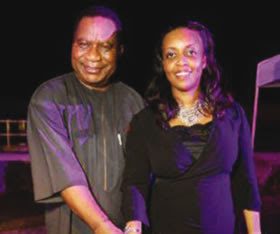 Following the arrest of the former Minister of Petroleum Resources, Mrs. Diezani Alison-Madueke, on allegations of bribery, corruption and money laundering, her interrogation continued yesterday at the Charing Cross Police Station, just as her husband, a former Chief of Naval Staff, Rear-Admiral Alison Madueke (rtd), has put together a legal team to defend his wife against the charges by the United Kingdom authorities.

The former minister was arrested last Friday in London by the British National Crime Agency (NCA) alongside four other people, but was granted bail after over five hours of questioning.

Even though the identities of the four other people arrested along with Mrs. Alison-Madueke were not disclosed, sources informed THISDAY that they were domestic staff and aides of the former minister.

NCA said investigations on the former minister were commenced in 2013 by the British authorities under the Proceeds of Crime Act (POCA) and transferred to it earlier this year.

Since her arrest, her husband, THISDAY learnt, was said to have swung into action by putting together a crack legal team to defend his wife in the UK.

One of the lawyers, Mr. Chike C. Amobi, a US-trained attorney, was said to have departed Lagos on Saturday night for London to join a Queen?s Counsel, who accompanied the minister to the Charing Cross Police Station to respond to questions from NCA on the allegations of bribery, corruption and money laundering against her. Amobi is expected back in Lagos today.

THISDAY further gathered that during its search of her residence in London, agents of the NCA, in addition to dispossessing the former minister of all her mobile phones, also confiscated less than ?30,000 in her possession. NCA, in addition, seized her passport to prevent her from leaving the UK.

After her arrest and bail, speculation was rife that she was supposed to appear at the Westminster Magistrate?s Court on Marylebone Road in London for arraignment.

However, the former minister did not show up at the court, which was besieged by Nigerian journalists who had gone to cover the case.

Instead, her mother, Mrs. Beatrice Agama, and another woman, Ms. Melanie Spencer, appeared at the court for yesterday?s sitting while the case on allegations of money laundering was adjourned for hearing by the court to April 5, 2016.

The court also granted an application for seizure of the money seized from Mrs. Alison-Madueke.

According to the BBC, the NCA monday secured the seizure of the sum of ?27,000 in the case involving the former petroleum minister at the magistrate?s court in London.

In a series of twitter posts by one of its correspondents, BBC reported: ?Today at Westminster Magistrate?s Court an application for detention of cash seized under the Proceeds of Crime Act was made v Diezani. The application was made by the National Crime Agency #Nigeria.

?This means that she, contrary to emails from the court, may not have had to attend today. Basically the NCA applied for an order that cash seized be detained #Nigeria.

?NCA have to apply on a cash seizure case within 48 hours so they must have found it recently #Nigeria. Or they found it earlier and this was a further application #Nigeria.

??27,000 was seized in the case vs Alison-Madueke and cash detained until April 2016 #Nigeria. Cash seized under Section 295 of Proceeds of Crime Act until 5th April 2016#Nigeria.?

By granting the application, which was filed by the UK?s NCA, the money would be held in the custody of the court until April next year.

A separate application was also made against Mrs. Agama for the seizure of ?5,000 and $2,000 (about ?6,300) while Ms. Spencer was made to forfeit ?10,000. Ms. Spencer was believed to have been one of the persons arrested alongside the former minister.

Efforts to get the NCA to provide more information on its investigation of the former minister proved abortive, as the agency informed THISDAY yesterday that its case against her was being secretly safeguarded.

Responding to THISDAY?s email requesting an update on the investigation, the crime agency in its official response, with reference number: 1080106, said it would not disclose the details of the matter.

?The NCA will not disclose details of any investigation it is currently conducting,? the Senior Duty Officer (IG) of the Control Centre in NCA stated.

The NCA, which became operational in October 2013, leads the UK?s law enforcement fight against serious and organised crime.

But THISDAY gathered that the NCA intends to spread its dragnet by interrogating certain ?persons of interest? in connection with the former minister.

A source in the UK explained that though the ?persons of interest? are not being charged for any crime, the UK authorities have decided to invite them to help them with their investigations.

Some of the so-called persons of interest, THISDAY learnt, include foreign-based businessman, Mr. Kola Aluko; a staff of the London office of the Nigerian National Petroleum Corporation (NNPC), Mr. Joe Mordi; the former minister?s London-based driver; another London-based driver/butler; and one of the co-founders of oil and gas trading firm Tridax Energy, Mr. Donald Chidi Amamgbo.

Meanwhile, the presidency monday confirmed the arrest in London of Mrs. Alison-Madueke on suspicion of bribery and money laundering.

?Nigeria is aware of the arrest of the former petroleum minister in London on money laundering charges,? presidential spokesman Garba Shehu told AFP.

?The government has been informed and the DSS (Department of State Services) is collaborating with the relevant security agencies in the UK to handle the matter,? he said.

The Economic and Financial Crimes Commission (EFCC) and its sister agency, the Independent Corrupt Practices and other Related Offences Commission (ICPC), however, declined comment on the corruption allegations against Mrs. Alison-Maduekwe.

The anti-graft agencies also refused to make any comment on whether or not they participated in the investigation on alleged money laundering which led to the arrest of the former minister in London.

EFFC had on Friday searched Mrs. Alison-Madueke?s homes in Lagos and Abuja, triggering speculations that vital information on the allegations against the former minister was recovered.

The commission however did not make an official pronouncement on the matter.

EFCC spokesperson, Mr. Wilson Uwujaren, declined to comment on questions posed to him.

?I wouldn?t like to comment on the issue, I have no comment, that is the major reason why a lot of people couldn?t reach me during the weekend.?

?The charges against her border on money laundering, it has to do with foreign currency; this has nothing to do with us,? he said.