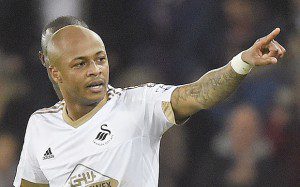 Swansea City star Andre Ayew has had an impressive first season in the Premier League. The Welsh side batted off plenty of competition in order to sign the player on a Bosman last summer from French team Marseille. The forward has impressed in a variety of positions and had the likes of Sunderland chasing him in January.

Ayew comes from good stock. His father is Ghanaian football legend Abedi Pele and his brother Jordan has been one of the few better performers at Aston Villa this season.

His older brother Ibrahim Ayew is also a footballer. The 27-year-old is currently playing in Ghana with Asante Kokoto and has previous experience in Europe during a stint with Belgian side Lierse.

He has been speaking about his brother this week, suggesting that the Swansea star’s valuation must have increased massively during his time at the Liberty Stadium.

“When they were going to the Premiership, especially Andre, there was even a point where he was up for only £5 million but no one was really willing to pay that.

“The likes of Newcastle and Liverpool all pulled back but today if you’re coming for Andre, you’ll have to pay anything not less than £30million.”

That is quite the claim, but probably not an accurate valuation.

At the start of the season Ayew scored six goals in his first 14 games for Swansea. But he has struggled with injury problems in the last couple of months and has not scored since January.

Swansea fans will be hoping he sticks around in the summer and gets back to full form and fitness soon.