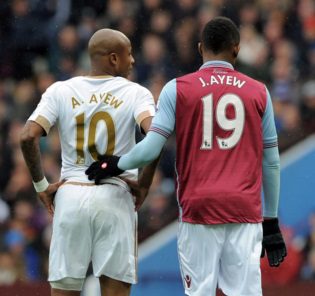 Jordan Ayew, right with his brother Andre Ayew, scored against each other

Andre Ayew has won the family battle over his younger brother Jordan Ayew after scoring the match-winner in Aston Villa’s 2-1 home loss against Swansea City on Saturday afternoon.

There was a family affair with Jordan and Andre Ayew on opposing sides and both midfielders played a key part for their sides with their father Abedi Ayew ‘Pele’ talking about the clash.

The pair played against each other in the French league last season and Jordan’s team won on that occasion, but this time their fortunes were reversed.

Andre should have put the visitors in front when he was played through on goal by Bafetimbi Gomis only for his shot to be saved by on-rushing keeper Brad Guzan.

Villa counter-attacked from the resulting corner, with Jordan nodding in Gabby Agbonlahor’s cross.

However, Swansea responded impressively and Andre atoned for his earlier miss as he scored the winner from six yards after a dangerous low cross by Naughton.

Both players are in the Ghana national team.