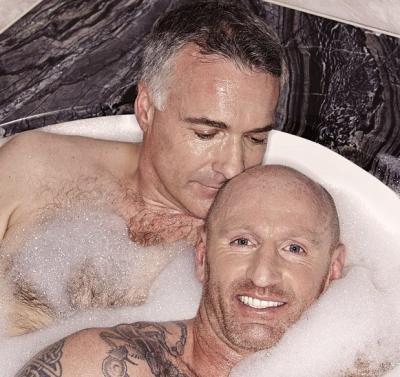 He had secretly struggled for years with his sexuality before coming out in 2009. Gareth Thomas is feeling better than ever since finding true love with Ian Baum.

Gareth was once a captain for Wales?s rugby and was previously married to his teenage love, Jemma, for 7 years but that didn?t work out. Now he has a new boy friend who he met online and they are already living together after a month and a half. This is how he described his love to Ian;

‘It differs massively [to former relationships] because I can be myself, there?s not a part of me lying at all.

‘I can be totally and utterly honest with Ian. I had a great relationship with my ex-wife. I know in my heart of hearts that this is probably the rest of my life with Ian.

‘I knew deep down when I was lying before in a relationship that it could potentially blow up in my face but with this one it feels like the final piece of the jigsaw.’