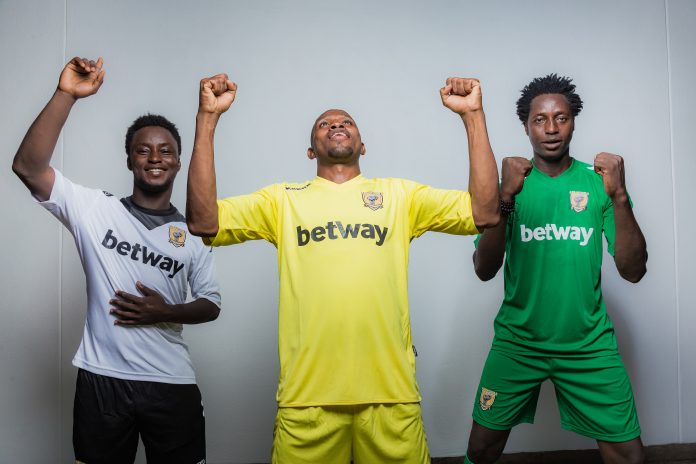 Betway Ghana, proud sponsor of 3-time GPL winners Ashanti Gold SC (Ash Gold SC) have unveiled the club’s new kits. The all new home and away kits were released in November and they come in the Ash Gold SC “yellow and black” colours with white application. The classy kits are designed by Italian brand Kappa and they are expected to boost the morale of the team.

The home kit features a traditional yellow design while a radically unique away kit features black with white application.

The kit has been made out of eco-friendly material as part of efforts to be environmentally conscious and pays homage to the club’s illustrious history.
The Yellow kit with black accents takes inspiration from the City of Obuasi’s Gold which features an Elephant with its nose balancing a ball on its head, a symbol of the city’s history as a leader in the mining of gold.

The incorporated symbolism into the new design serves as a badge of honour to demonstrate that, through hard work, an ‘Osono Aboakese’ attitude coupled with the highest of standards, Ash Gold SC has evolved to become the pioneers of the Ghana Premier League football game. In continuously striving for greatness and success, Ash Gold SC has become a reputable football club over the years.

Country Manager for Betway Ghana, Kwabena Nkrumah has intimated that the company has more in stock for the club with respect to further logistics improvement. “Our sponsorship deal with Ash Gold SC goes beyond merely dishing out money, we are bent on adding value to the club. The jerseys are just the beginning” he said.
“It is going to be a sensational league next season and we at Betway Ghana are excited to be part of this moment for Ashanti Gold SC. Last year was a clear indication of the potential of the club, so we are hopeful that Ash Gold SC will make us proud” he added.

Chief Executive Office of Ash Gold SC, Kudjoe Fianoo has said that the players are looking forward to wearing the new jerseys. “With the new jersey, the club has heeded the call from supporters and observers alike to improve beyond their games on the pitch” he said.

“The away jersey in particular, with its beautiful neck collar, gives the new kits better aesthetics, they are very nice and we’re looking forward to wearing them next season” he added.

“Ash Gold SC is a Club steeped in great history, and as they approach 38 years, we felt that it was important to honour certain elements of our history in the executions of the new jerseys. We are proud of the new kits and look forward to seeing them both on the field” said Kwabena Nkrumah.

The kit will be worn for the first time next season by the Ash Gold SC team during their first league match.

The Betway Group is a leading provider of first-class entertainment across sports betting, casino, bingo and poker. Launched in 2006, the company operates across a number of regulated online markets and holds licenses in the UK, Malta, Italy, Denmark, Spain, Belgium, Germany, Kenya, Uganda and now Ghana. Based in Malta and Guernsey, with support from London, Isle of Man, Stockholm and Cape Town, the Betway team comprises over 1,000 people.