Black Stars Coach, Avram Grant has named a 26-man provisional squad to represent Ghana at the 2017 African Cup of Nations (AFCON) in Gabon, which commences on January 14, 2017. 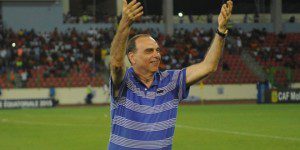 The coach in a press conference revealed that it has not been easy trying to fix a good and competent squad for the tournament. Captain Asamoah leads the side that will begin an 11-day training tour in the UAE before travelling to Gabon on January 13 for the competition.

“Ghana’s defeat to Algeria is a good test” – Coach