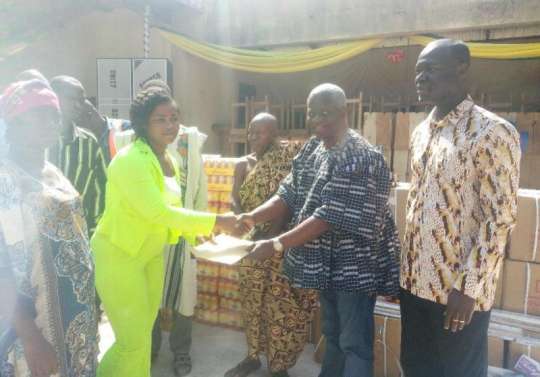 The Bui Power Authority (BPA), Managers of the Bui Dam in the Banda District of the Bono region has set aside GhC3, 033,627.96 to offer employable skill training to improve on the livelihoods of people within its catchment area.

More than 815 persons whose lives were directly or indirectly affected by the construction of the 400 megawatts hydro-electric dam are expected to benefit from the trainings in hairdressing, dressmaking, tailoring, carpentry and masonry.

The training followed a needs assessment conducted by the BPA in the Dam’s affected communities – Bui, Bator, Akanyakrom, Dokokyina, Lucene, Dam site, Agbegikuro, and Brewohodi and aimed at helping to improve on the socio-economic conditions of the beneficiaries.It is expected to be completed in June 2020.

Mr Fred Oware, the Chief Executive Officer (CEO) of the BPA disclosed this when he presented training equipment to 63 apprentices to be engaged in hairdressing and dressmaking at a ceremony held at the Bui resettlement camp.

The tools include sewing machines, hair dryers, tables and chairs and other training accessories, and the Authority in addition paid the apprenticeship fees covering the trainees.

Mr Oware emphasised the BPA’s determination to ensure that all the resettled people affected by the Bui Dam project obtained decent work to alleviate their plight.

He said the BPA considered skill training as the best option to create jobs for the affected people to enhance their standard of living.

Mr Oware indicated that the Authority had also constructed 10 fish ponds and very soon it would hand-over the ponds to the fishing communities in the area, saying it would extend development projects to the Banda and Bongase communities as well.

He gave the assurance that the BPA would ensure all the affected communities within the Dam’s catchment area benefit from a sort of development and empowerment programme and urged the people to bury their differences and forge ahead in unity.

Mr Oware said without prevailing peace, it would be difficult for the BPA to develop the communities and advised the people to promote social cohesion.

Nana Kwadwo Wuo II, the Chief of Bui, expressed appreciation to the BPA for the level of development witnessed in the resettlement communities and prayed the Authority would continue to help address the needs of the people.

He said the Authority had revived the hope of the affected communities of the Dam, and pledged the people‘s readiness to promote cordial relations with the BPA to improve on development in the area.

Mr Salifu Wumbilla, the Director, General Services Department of the BPA, said the Authority had set up scholarship package to support tertiary students in the area.

He advised the apprentices to take their training serious and take proper care of the machines so that on completion, they would use them to set up their businesses.