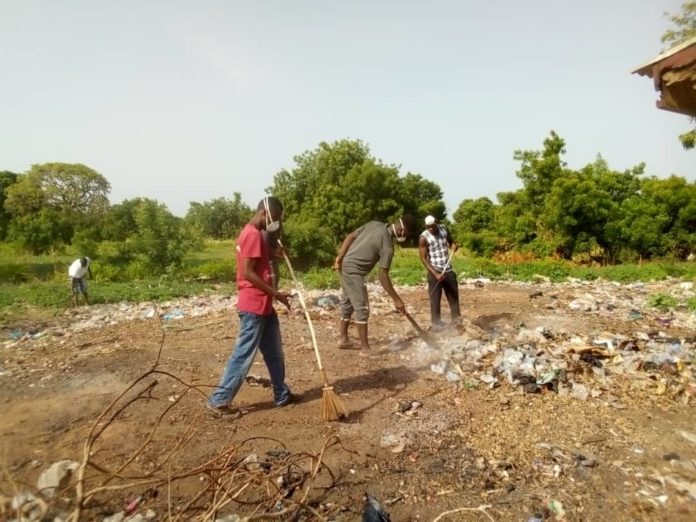 The Assembly Man for Canteen Electoral Area, Hon.Ananpansah B Abraham, has embarked on a cleanup exercise as part of his “Keep Canteen Clean Campaign”.

Rallying the support of his Unit Committee members, the honorable man led the youth to clean round the only public toilet in the electoral area.

With synergy and combined energy, the youth tended to keep the vicinity of the lavatory squeaky-clean.
The garbage was collected and burnt, whilst the interior of the toilet was swept and mobbed.

A road map has been drawn together with opinion leaders and the services of a community member has been engaged to regularly clean the toiled and take charge of its maintenance.

The new caretaker has been supported with soap, detergents, and the necessary working tools from the office of the Assembly Man to enhance the work.

There has been challenges with the management of the said public toilet after the demise of the caretaker some two years ago.

The Assembly man reiterated the fact that his vision is to see a gradual reformation of Canteen Electoral Area and sanitation is key in this agenda, adding that, “the community has the power to create health”.

According to him, it is more costly to treat diarrheal disease such as Cholera,Typhoid inter alia than the community mobilising to engage in communal labour.

The Development Journalist disclosed that together with his Unit Committee members, the month of May has been declared ‘communal labour month’ where major rehabilitation works would be carried out in the electoral area.

Already, work is ongoing on a dilapidated bridge on an important link road in the community.

Rumble strips he noted,would be constructed in accident prone areas in the electoral area to safeguard lives.

He prayed for support from well meaning members of the community to realise this all important goal.

Opinion leaders expressed gratitude to the assembly man and his Unit Committee members for the initiative and expressed readiness to support the vision.

The Unit Committee chairman,Mr.Seidu Sumaila said he and his colleagues are impressed with the leadership of the assembly man and are ready to support him reform Canteen Electoral Area.

He said not only is the Assembly Man a team player, but results oriented and working together with him,Canteen Electoral Area would be a better place.

He appealed for more support from the community.