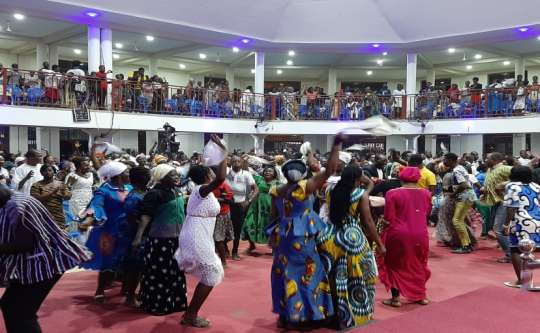 A cross section of people in the Sekondi-Takoradi Metropolitan Assembly (STMA) of the Western Region have welcomed the decision of the Government to lift the ban on mass gathering permitting a limit of 100 people at a time.

Those expressing their appreciation, include Christians who are happy that church services can go on within the specific guidelines put in place to limits the spread of the COVID-19.

It would be recalled that President Nana Akufo-Addo on March 15, ordered the closure of all schools and universities and the suspension of all public gatherings for four weeks as a means to stem the spread of the COVID-19 pandemic.

A cross section of the Christians who spoke to the Ghana News Agency in an interview argued that the church was noted to maintain discipline in its services and can best adhere to the social distancing and other protocols.

According to them, the order to close the churches turned out to be the most difficult one for them to obey as it was having a big impact on them because communal prayer and the discipline of the religious calendar were central to their lives.

Prophet Godlove Agbemodzi, General Overseer of the Christ Miracle Power Church (CMPC), said when the announcement on the closure was first made, he was surprised, in that it was hard to imagine life without religious services for some.

He lamented that life had not been easy for the past 10 weeks that he had been in the house without taking offerings.

Other pastors the GNA spoke to said they have been in great distress since the services were their means of livelihood.

President Nana Akufo-Addo in his address to the nation on 31 May, 2020, to provide an update on COVID-19 pandemic, announced that religious services could commence with service lasting for an hour per session and the congregation should be limited to 100 people at a time.

However, some people were of the view that looking at the prescribed modalities given them by the Ministry of Religious Affairs to follow, the elite and well-endowed churches could follow, but the smaller ones and those in the villages or peri-urban communities may not be able to bear the cost that comes with it.

According to the critics, churches in the rural communities before the closure were suffering from low incomes from tithes and offerings, which left some pastors no choice than to run prayer sessions frequently to increase their revenue.

“Considering the all-night services, the miracle and the anointing services with people falling under the power of the anointing and the modalities to observe social distancing, I will not show up for some time at my church unless the pandemic is curbed,” she stated.

She therefore advised churches to adopt digital platforms for services like payment of tithes and offering through mobile money platforms while those who can afford should offer online streaming services.

Meanwhile, the leadership of the Fire Glory Church at Tanokrom, a suburb of Takoradi, said they would hold two services on Sunday with the first starting at 7am to 8.30 am while the second begins at 9am to 10.30.

They further indicated that they would be holding a five-day Holy Spirit Revival service from Monday 8 to 12 June,2020.

All must be involved in fight against human trafficking – Queenmother

Founder of Voice of Refuge International Ministry elevated into office of Rev. Minister