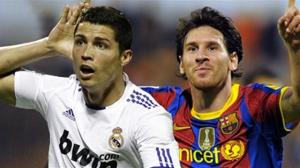 The annual publication of the most valuable players in the world by the International Centre for Sports Studies (CIES) Football Observatory is always a fertile ground for debate.

The CIES Football Observatory?s figures are calculated using an exclusive algorithm which draws on a database of over 1,500 transfers since 2009.

It takes into account performance, characteristics and results achieved by their teams.

Clearly what works in Messi?s favor Is that he is 27, two full years younger than the Portugal captain.

Otherwise it is hard to see the reasoning behind the respective values, when Ronaldo has scored 26 goals in just 15 league games, to Messi?s 15 in 17.

Rumours are linking Chelsea with a mammoth move for Messi, who is reported to be unhappy with life in Barcelona.

At least now Roman Abramovich knows the fee he must scrabble together if he is to do the unthinkable and sign Messi from Barca.