The Upper West Regional Secretariat of the Ghana Private Road Transport Union (GPRTU) has bemoaned the deplorable state of roads in the region saying it affects the daily activities of the people and stalled economic growth. 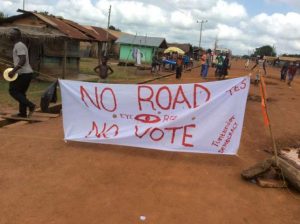 The Union raised the concern during an interaction with Mr Sulemana Alhassan, the Upper West Regional Minister, to brief him of some challenges facing the Union.

Alhaji Nuhu Mahama, the Upper West Regional Senior Industrial Relations Officer of the GPRTU, mentioned the Wa-Wechiau, Wa-Bulenga and the Wa-Tumu roads as some of the roads that needed immediate attention to help improve the condition of work of the union.

He said poor lighting systems and inadequate security at the lorry stations were creating serious security challenges to passengers and other users of the premises as they were exposed to danger.

Alhaji Mahama said armed robbers on some of the major roads such as the Wa-Tumu, and Wa-Wahabu-Wellembelle-Tumu roads were a threat to travelers and deterred drivers to ply those routes.

He said despite those challenges the Union provided free transport services to pregnant women in the communities to help improve on maternal healthcare and had donated its conference hall to the National Health Insurance Scheme to operate in.

Alhaji Mahama said the Union also assisted the Electoral Commission with means of transport during the 2016 general election as part of its commitment to supporting the Government.

He said the Union would continue to support government in revenue mobilisation to facilitate the development of the region and the nation at large.

“The Union will remain resolute in its efforts to mobilise funds from the lorry parks to the municipal and district assemblies for the rapid development of the region,” he said.