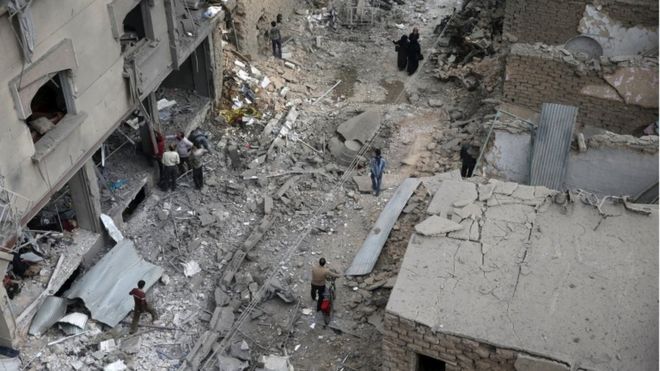 The third round of Syria peace talks, launched earlier this week amid intensive global attention, ground to a halt Wednesday night, as UN Special Envoy for Syria Staffan de Mistura announced a recess and said negotiations would resume at a later date. During the previous three days, substantive discussions were held up by “unresolved procedural issues,” according to a statement by the envoy’s office. Mistura said the talks would resume no later than Feb. 25.

While speaking to the press, the UN envoy said he is not frustrated or disappointed but will remain realistic in the face of challenges.

The temporary pause of intra-Syrian talks does not indicate that discussions have broken down, though more work needs to be done by all sides involved.

Mistura highlighted that both sides are interested in starting the political process, adding that a date for the resumption of talks had been set for Feb. 25.

“I will be asking for the ISSG (International Syria Support Group) to convene as soon as possible, hopefully already in Munich, the Security Council to meet, and we reconvene in Geneva again on February 25,” he said.

The UN special envoy will leave Geneva Thursday to attend the 2016 Supporting Syria and the Region Conference in London, a UN-sponsored event designed to raise 9 billion U.S. dollars needed to alleviate sufferings of millions of Syrians trapped in a five-year-long civil war.

In contrast to Mistura’s upbeat mood, the Syrian opposition delegation for the Geneva meeting appeared much less hopeful for the prospect of a political solution to the protracted Syrian crisis.

Riad Hibjab, coordinator of the Syrian opposition delegation, told reporters Wednesday night that peace can’t be done with the presence of Bashar al-Assad and with the foreign forces meddling.

He blamed the Syrian government’s delegation for undermining the success of intra-Syrian talks. “We came to Geneva and were keen to make it a success, but it seems like the other side doesn’t want it to be a success,” he said.

The Saudi-backed opposition, known as the High Negotiations Committee, said it would leave Geneva Thursday and will not return until there are changes on the ground.

Meanwhile, the head of the Syrian delegation, Bashar Ja’afari, said the opposition “had orders from its masters to ruin the talks.”

Backed by Russian airstrikes and Hezbollah fighters, the Syrian government forces broke the siege on Nubul and Zahra in the northern countryside of Aleppo, Syrian state news agency SANA said.

The army reached the two towns after capturing several key towns and areas in the past few days, a source told Xinhua.

Wednesday’s battles were part of an offensive by the government forces to separate the city of Aleppo from its northern countryside, where the rebels receive their supplies from Turkey, the source told Xinhua.

Following Mistura’s announcement of a three-week suspension of the Syria peace talks, the Western powers demanding the removal of Assad from the very beginning of the crisis condemned the Syrian government for acting in bad faith.

U.S. Secretary of State John Kerry said in a statement released late Wednesday that the ongoing attacks by Syrian forces have signaled that “Syria intends to seek a military solution rather than a political one.”

He urged the Syrian government and its supporters to halt bombardment of opposition-held areas, especially in Aleppo, and to lift their besiegement of civilians.

French Foreign Minister Laurent Fabius said France condemns the “brutal offensive by the Syrian regime with Russia’s support to encircle and asphyxiate Aleppo and its hundreds of thousands of residents.”

In a statement, Fabius said France backs the suspension of the talks, saying that Assad’s regime and its supporters “visibly don’t want to contribute to them in good faith, thus torpedoing peace efforts.”

Russia, on the other hand, expressed regret that the intra-Syria peace talks were suspended. “I think that what happened today (the suspension) will naturally affect the discussion that will take place on February 11 in Munich within the framework of the International Syria Support Group,” Sputnik cited Russian Deputy Foreign Minister Gennady Gatilov as saying.

He hoped that ISSG participants “will speak in favor of the continuation of the negotiation process and nobody will put up any obstacles.” Enditem