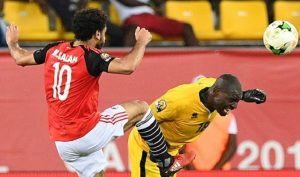 The cranes of Uganda has moved to the top of Group E of the FIFA 2018 World Cup qualifiers after a narrow win over Egypt on Thursday at the Mandela National sports stadium in Kampala.

The Ugandans, who are seeking their first ever World Cup appearance looked more purposeful with a very swift attacking display forcing brilliant saves out of the good old Essam El Hadary in the first half.

After recess, the homers eventually broke the deadlock following several attempts at goal.

Emmanuel Okwi, 30, weaved his way through the defense of the Egyptians to drive the ball low into the back of the net on the 51st minute.

Mohammed Salah came close to getting the equalizer for Egypt but his header was neatly thwarted by skipper Denis Onyango.

As Hector Cuper’s men suffered their first defeat in the campaign, the Cranes are yet to concede a goal after their third encounter.

Both sides would meet again in Alexandria, Egypt for the return fixture on Tuesday.

This is Uganda’s first game under their interim coach, Moses Basena, after he took over from Serbian Coach Micho.

Both teams last met in January at the group stage of the African Cup of Nations where Egypt managed a lone goal through Abdullah El-Said.

Uganda leads Group E with seven points, one ahead of Egypt. Ghana is third with one point with Congo at the bottom with no point.

Ghana plays Congo on Friday at the Baba Yara Sports Stadium in Kumasi, with the return encounter in Brazzaville in five days time.