The well being and progress of all females in Ghana is endangered when in spite of all the efforts that Ghana has made in eliminating all forms of discrimination against women since February 1986 when we signed the CEDAW, the MP for Daboya has introduced the implementation of the much feared, wicked sharia law into our national discourse. His comments do not demonstrate a commitment to the oath he swore as a Member of Parliament “…..to preserve, protect and defend the Constitution of the Republic of Ghana, …and faithfully and conscientiously discharge the duties of a member of Parliament…”. Indeed Mr Nelson Abudu Baani’s “stoning and hanging adulterous wives” comments are offensive, vexatious and inconsistent with the very spirit and principles of the Ghanaian Constitution which he has sworn to defend and protect. No leader of this country must subvert, abuse or take for granted the sovereign will of our people, the rule of law and “the protection and preservation of Fundamental Human Rights and Freedoms, Unity and Stability for our Nation”. We need to seriously question the integrity of legislator Baani who has blatantly ignored and disrespected the very tenets that the Ghanaian society is built on. What is he doing in Ghana’s Parliament today? 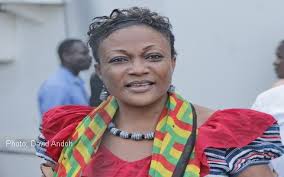 Societal perceptions about who we are as a people should be shaped by our legislators who are the second arm of leadership in Ghana. Ghana has been acclaimed as the beacon of democracy in Sub Saharan Africa and as the global world is watching as, it is important to know which direction the Daboya MP is shaping our thinking and our laws with this archaic, barbaric and chauvinistic mindset about the daughters of mother Ghana? Is that the policy directive of the NDC Government on women? Is he asking us to stone his mother, daughter, niece and aunts as well if they commit adultery? Where will we draw the line? These are urgent and serious times for the journey women in Ghana have travelled thus far in our quest for equity and partnership in national development. Minister for Gender and Social Protection, your silence is deafening on these critical matters against women.

The MP for Daboya is dangerous for our legislature because in spite of the uproar he has caused he’s unrepentant. In his so called apology on Joyfm, he states of women, “why are they afraid that if you cheat on your husband you should be stoned or hanged to death?”…,”that’s my opinion…..I just want punishment for women who will be adulterous”. It is hypocritically discriminatory that he has not suggested punishment for adulterous men. Mr Baani does not appear to understand his role as a legislator of Ghana and not Saudi Arabia ( or any other country that the Sharia law is practiced), and the fact that he is in the Ghanaian Parliament to represent the opinions of the good people of Daboya who sent him there on their behalf. Would the women in Daboya appreciate and support his arguments to stone them to death? The blatant discrimination exposed by his comments are lost on him and his self righteous double standards in asking for the implementation of the Sharia law during discussions on the Intestate Succession Bill is a blow to the protection of women’s rights, dangerous to all women, our Constitution and our democracy.

How about men who commit adultery, why has the MP for Daboya left them out? Whatever happened to equal opportunities? Shouldn’t what is good for the goose be good for the gander? Statistics worldwide actually indicate that more men commit adultery than women. He also singled out his wife for punishment, how about if his mother, sister, daughter, aunt and all other female relations committed adultery, what happens then? Is his wife not the the mother of his children? How will he defend the stoning to death of their mother to their children if this wicked law is implemented? What sort of example is he attempting to set and is this a just and befitting legacy – asking us to wipe out all these females, and leave their mail counterparts? Ghana would be one miserable place. Mr Baani’s opinions on this Sharia law is a faux pas and potentially dangerous for the emancipation and development of women in Ghana. It is a recipe for causing fear and panic in our women, especially when the NDC Government is at pains to fulfil their manifesto promise of a minimum of 40% female participation in decision-making positions in governance.

Stoning or hanging anyone for any offence, be it a female or male is wrong, wicked and unacceptable. It is not an option for any democracy and it is not for Ghana. We do not need these archaic, barbaric and dark ages laws in mother Ghana, after all the advances and strides we have made in protecting the rights and freedoms of all, including women. Women have been long suffering indignities under our negative traditional and cultural practices and attitudes of male dominance, chauvinism and bigotry. Poor widows have been condemned as witches and thrown out as outcasts to witch camps. Girls have had their genitals mutilated, others forced into early marriages and many uneducated to suppress them. Women have been hewers of wood, exposed to scorpion and snake bites to pick sheanuts, firewood and farmwork; sat in the scorching sun and beaten by rain to sell things in the markets, gone hungry and some even become prostitutes out of desperation to feed, clothe, educate and support their children, families and husbands like Mr Baani. Because of these challenges Ghanaian women have faced in our male dominant patriarchal society, to date out of our our 275 members of Parliament, only 30 are women and they are all under siege and the threat of loosing their seats is very real. In the over 200 district assemblies we have barely 6.7% being women. Women in rural and urban Ghana, and women in politics and governance have worked too hard and contributed too much to be treated so shabbily and wickedly by no less a person than a member of Parliament who should know better. Women give birth to sons and daughters and nurture them to adulthood, and we must be acknowledged, appreciated, respected and honoured as the engine of growth from the home to nation building. The Daboya Mp who is also a beneficiary of Ghanaian motherhood, assuming he was born by a woman, has been politically, morally,socially and constitutionally incorrect and dishonest in his application of his opinion of our women.

Has the MP forgotten that the will of the people of Daboya is vested in him to represent them responsibly and honourably? Have his comments demonstrated that he has their best interest at heart in asking for the stoning of their daughters and mothers who commit adultery? This is the height of irresponsibility when the legislator cannot provide the political will to provide holistic responses to the varied challenges of women, cannot advocate for their rights to be protected, nor highlight and advocate for change in negative traditional and cultural practices and attitudes which deny women equality and equity in accessing national opportunities to enable them fulfil their full potential and aspiration. Who knows what he will say next? How can this lawmaker be allowed to remain in Parliament to present such an indefensible and reprehensible position? His inability to defend the Constitutional rights of close to 52% of our population, who happen to be women is criminal and dangerous, and he must bow his head in shame and bow out of Parliament. Mr MP of Daboya, you do not deserve to be a Memeber of Parliament of mother Ghana.