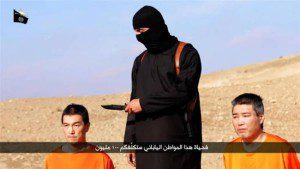 A 72-hour deadline set by ISIL Takfiri militants for Japan?s government to pay a ransom to release two Japanese captives has come to an end, with no word on the fate of the hostages.

The ISIL militants posted an online warning after the deadline expired on Friday, saying the ?countdown has begun? for the group to kill the two Japanese hostages, identified as Haruna Yukawa and Kenji Goto.

The terrorist group released a video on January 20, threatening to kill the two hostages unless Tokyo pays the 200-million-dollar?ransom within 72 hours.

Meanwhile, the Japanese government said it has yet to receive a message from the militants on the status of the captives.

Tokyo said it was looking for all possible channels to contact the hostage takers, government spokesman Yoshihide Suga said Thursday.

Hours before the Friday deadline, Junko Ishido, the mother of Goto, called on Tokyo to pay off the militants.

Ishido also directly addressed the ISIL terrorists, saying her son is a neutral journalist who ?wanted to save children?s lives in war zones.?

Such pleas have so far failed to release hostages captured by the ISIL militant group.

The terrorists have beheaded at least five foreigners, including aid workers and journalists from the United States and Britain.

The ISIL militants have been engaged in crimes against humanity in the areas under their control in Iraq and Syria. They have terrorized and killed people of all communities, including Shias, Sunnis, Kurds, and Christians.