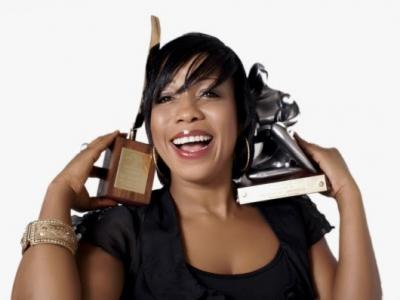 While declaring her  political intentions, Kenny Saint Best revealed that she helped 2face Idibia, Paul Play, Essence e.t.c  who have all made it big today in the music industry.  She made this known on Thursday 2nd of October, 2014 at Forks and Fingers restaurant in Opebi . The singer turned politicians will be running for a seat in the Lagos State House of Assembly under APC.

On why she delved into politics she said;

?Every night I pass through Opebi road and see young girls (sex workers), I feel sad and it is worrisome that they keep increasing every year. This constituency is the seat of power for the entire state. I am going to the Assembly and it will be transformation galore,?.

About her contribution to the growth of the entertainment industry, KSB said;

?During my time with Kennis Music in the past 16 years, I touched the lives of many youth who have become big today. Some I never knew, but I saw something in them. Today, 2Face, Paul Play Dairo, Remedies, Essence are all success stories because we believed in them. Imagine what we can do through governance??

Running Down NPP Government Because of IMF Will NOT Automatically Make You President in 2024: Razak Kojo Opoku Writes

Bawumia Is Stoned By The NDC And Others Because They See A Lot Of Harvest In Him: Razak Kojo Opoku Writes

Prophetic Kitchen: 12 Skills To Make You Successful In Life In Times Of Crisis (I)

Marin Barzani: Why Building Your Skill-Set Is The Only Way To Be Successful