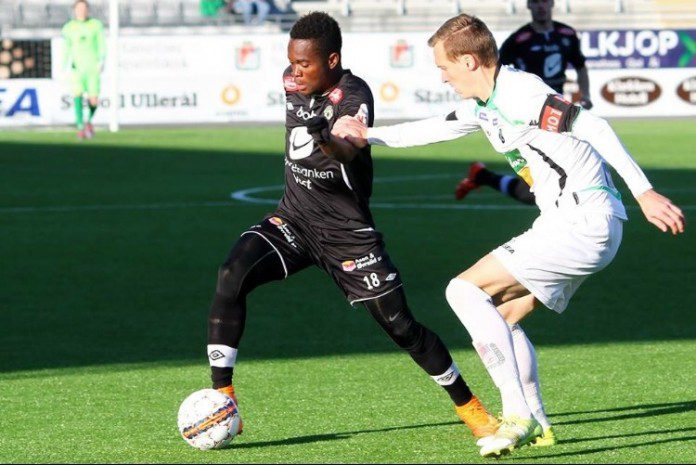 Otoo scored his second brace in three days on Wednesday

Ghana striker Mahatama Otoo extended his impressive scoring form by hitting a brace to help Sogndal go closer to clinching the Norwegian second tier title with a vital 4-3 win over Kristiansund on Wednesday.

The 23-year-old who scored twice just three days ago got his side off to a good started by heading in a 7th minute cross.

Otoo returned to score again in 39th minute by bundling in after a goalmouth melee to restore Sogndal?s lead after Jonas Ronningen equalized for the visitors.

Kristian Opseth extended Sogndal?s lead before Tor Torske and Thomas Drage scored for either side in 56th and 61st minute respectively.

A 90th minute strike from Dan Ulvestad proved too little too late for Kristiansund as Sogndal saw out the remaining minutes to clinch the maximum three points with a 4-3 win.

The win all but certain secures the championship title for Sogndal who are now six points adrift second-placed Brann with two games to end the season.

Sogndal have already secured qualification to the Norwegian top flight and now chasing the title in the second tier league.

Mahatma Otoo on the other hand increased his season?s tally to 13 goals in 24 league matches and is now just four shy off in the top scorer?s race.