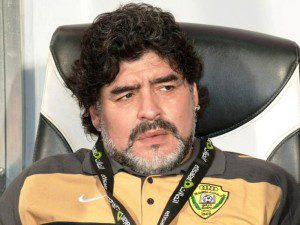 Argentine football legend Diego Maradona was recovering in hospital on Sunday after undergoing surgery to stem bleeding in his stomach.

The operation was scheduled earlier this month after doctors identified the problem during a routine medical check at the Olivos clinic on the outskirts of Argentina’s capital Buenos Aires. “Diego Maradona’s surgical procedure is over,” his lawyer Matias Morla said on Twitter.

“Thank God everything went perfectly.” Reports in Argentine media said the condition was not serious and that the bleeding was caused by a hernia. The former Boca Juniors, Barcelona and Napoli forward has suffered a series of health problems since ending his playing career in 1997.

In 2004, he was hospitalized with severe heart and respiratory problems related to a long battle with drug addiction. He has also undergone two gastric bypass operations to control his weight and received treatment for alcohol abuse.

Amazonia Loses Nearly 1,800 Square Miles of Rainforest in One Year