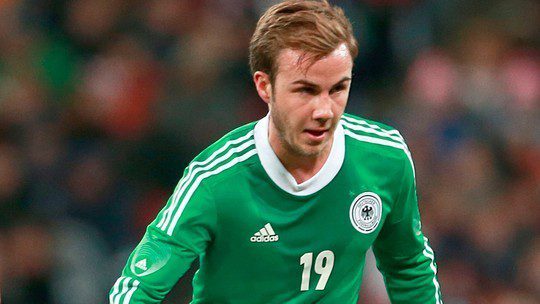 Think of Thomas Hassler and you are not that far away from the blueprint for Germany?s latest creative talent.

The pint-sized midfielder who inspired Germany to their last two major titles ? the 1990 World Cup and Euro 96 ? had proved a tough man for the German national side to replace following his retirement in 2000 ? until, that is, Mario Gotze came exploding onto the scene.

Most at home when operating in the space behind two strikers, Gotze has shot to promience since coming through the Borussia Dortmund youth academy, emerging as an inspirational figure for the yellow and blacks and also for Germany?s youth sides.

Comparisons with the 101-times capped Hassler were always likely to happen as his star continued to rise ? but some have gone further, with Gotze even being placed in the same bracket as the best player of his generation.

?He?s the German Messi,? Germany?s two-time World Cup winner Franz Beckenbauer once said. ?He has the same understanding and technique, and he?s a footballer who acts purely on his instincts ? just like Messi.

?It?s impossible to stop Mario Gotze. You just cannot play any better than him. He just strolls through as if there are no opponents.?

Dortmund were unable to stop Gotze either when Bayern Munich stumped up the full value of his release clause ? 37 million euros, a then Bundesliga record ? last summer.

Gotze was lured back home to Bavaria where the prospect of working under Pep Guardiola was cited as one of his main motivations. Under the Catalan, he hoped to develop in a similar way Messi had at Barcelona, ensuring that not only Beckenbauer would be drawing those parallels in future.

An injury picked up in the semi-final of last year?s Champions League, which ruled him out of the final against Bayern, also saw him miss the start of the 2013/14 campaign.

Since returning in October, though, he quickly made up for lost time. In just 20 Bundesliga starts, Gotze netted 10 goals and laid on a further 10. He created almost a century of chances for his team-mates, becoming one of the exceptions to Guardiola?s rotation policy.

Bayern without Gotze is as unimaginable now as Germany without their most resourceful asset. His flexibility means he can also play as the ?false nine? frequently preferred by Joachim Low, a position similar to Messi?s at Barcelona.

The 2014 World Cup is a stage for him to draw yet more favourable comparisons with the four-time world player of the year, but in his head the motivation will not be to become the second Messi ? but the first and only Gotze.