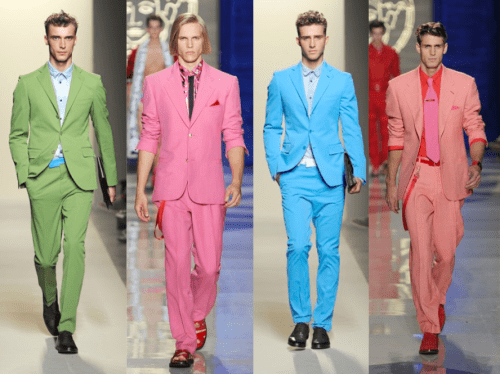 The Melvin Swish Theory says colours affect our lives in so many ways thus it has affected the way we think and dress. This is to throw more light on the fact that colours are the most important means of communicating to people. It describes the mood and state of a person; either he/she is open for a conversation or not.

Due to this trend a lot of designers are blending colours and coming up with beautiful designs for suit wearers.

Coloured suits are one of the daring fashion outfits that have gradually settled in society and people are getting more comfortable with it.

Depending on how it?s worn wearing a green, blue, pink or red suit is not a bad idea at all and it?s for anyone who likes to add a little twist to their outfits.

In Ghana for instance, suits have been one common outfit for official occasions. Among the popular suits worn are American suits, British suits and Italian suits.

Lately, most men are advancing from the British and American suits to Italian suits due to its versatility.

At first, coloured suits were a no go area because black suits were the order of the day but recently most men have adapted to it. Also due to the emergence of these colours, one is marked out as dressing too serious and not trendy in black suits.

Some men abuse the use of suits of colour especially when they do not consider when and how to combine it with other outfits. For instance, wearing a bright lemon green suit and an orange pair of trousers gives an awkward and outrageous look.

According to a designer at Emperor Designs in Accra, coloured suits are too bright and must not be worn in the day but rather in the night to lessen the attention one is likely to receive.

Notwithstanding, this kind of dressing is lately common in churches and most people including pastors are a fond of coloured suits.

In an interview with Mr. Evans Otoo, founder of Zion Ministry, he stated that pastors need to look good and ?sharp? since they are representing God on the earth and thus as a Christian wearing bright colours does not change anything about your personality.

He said Christians must be in their best dresses to appear presentable and strongly believes coloured suits are the best fashion trends he is in love with.

Mr. Ntiamoah of Plaza Decoration also believes that blending colours is not an easy thing. It involves the wearer making a good choice and knowing how to blend different colours. Plain to vivid prints and blocking colours can add a spark and brightness to overall appearance.

Speaking with Daniel Inkoom of Fashion Plaza Boutique, he said ?fashion trends come and go, and we must grow in line with technology to adjust to all fashion trends?.

?These categories of men?s suits have now blended into one another and are not like the old suits in the 80s. They are really nice and make the wearer look smart?, he added.