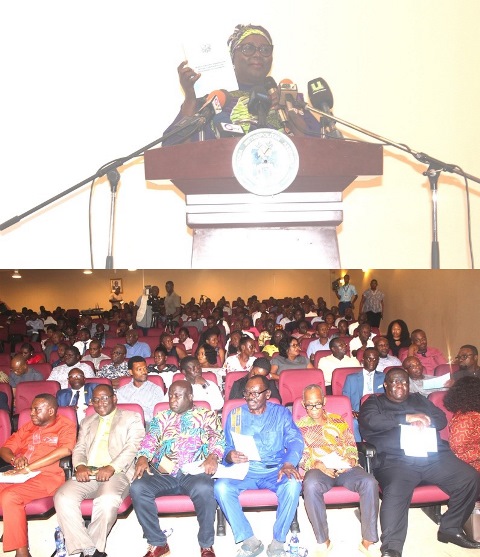 She also directed leadership of all the MMDAs to ensure that Assembly and Presiding Members were adequately trained on the new Orders to facilitate easy understanding and application of the document.

The Minister this stated during the launch of the revised Model Standing Orders for MMDAs in Accra, to facilitate effective and efficient local level governance.

The Standing Orders was developed by the Ministry under the powers conferred on it by section 18(6) of Act 936 after consultation with the Office of the Attorney-General and the Ministry of Justice and relevant stakeholders in the local government sector.

She stated that government was committed to deepening decentralisation and local governance by ensuring that policies, laws, regulations and guidelines for efficient local administration of MMDAs were made available at all times.

The revised Orders was an addition to the Ministry’s laws, policies and guidelines developed in the past three years to deepen effective decentralisation.

Touching on some of the features of the new Orders, Hajia Mahama said under types of meeting, the Orders were realigned with Act, 936 with the introduction of provisions to cater for circumstances under which an Assembly was unable to elect a Presiding Member at an inaugural meetings.

The new Orders present Presiding Members from refusing to call meetings, especially when it was necessary for the efficient operations of the business of the Assembly.

It also now makes the Executive Committee more accountable to the General Assembly by ensuring that their reports are at all-time considered and approved by the General Assembly and give powers to the presiding Member to exercise discretion at meetings by allowing him/her to introduce items of businesses that do not appear on the agenda.

Hajia Mahama explained that, the features were aimed at improving the content of the Orders, aligning it with the requirements of the Local Governance Act (Act 936) and improving deliberations at the sittings of the various MMDAs.

She announced that all the MMDAs would be inaugurated on Thursday, January 23 in the District capitals of the various Assemblies across the country, and entreated the Assemblies to swiftly pass a resolution and adopt the new Orders as required by Act 936 and begin work immediately.

The new Orders was issued on the basis of the Local Government Act (Act 462).In 2016 Act 462 was repealed with other legislations leading to the development of a Local Governance Finance Act 2016 (Act 936).

Professor Samuel Nunoo Woode, former Chairman of the Public Service Commission said the documents were designed to ensure that there was order, reliability and predictability on the part of MMDAs in discharging their duties.

He said the documents were based on the experiences and ideas gathered over the years on local governance procedures based on constitutional mandates to ensure legitimacy and orderliness in the system.

The Professor suggested that the document be translated into local languages to ensure easy comprehension among the citizenry.