Perseus Mining Ghana Limited (PMGL) at Ayanfuri, in the Central Region, has reaffirmed its strong commitment towards providing the needed socio-economic infrastructure to raise the quality of life of the people in areas, where it has been operating. 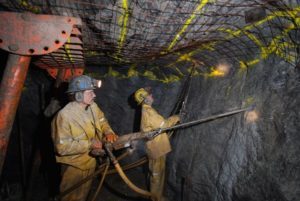 Mr Edwin Allotey Acquaye, Community Relations and Sustainability Manager, said it would continue to focus on helping to tackle felt-needs of the population.

It would work closely work with community leaders and the district assembly to identify and implement projects to hasten the socio-economic progress of the area.

Addressing a press conference held by the gold mining company at Ayanfuri, he vowed that it would keep to the commitments made to the people.

The press conference had been organized to debunk the report on some social media platforms that the new township built to resettle inhabitants of four communities affected by the mining operation, was shoddily done with many of the buildings, having already developed deep cracks.

Added to this is also the claim of lack of basic social amenities – water, schools, sanitation facilities and poor drainage system, which is causing erosion in the new township.

Mr. Acquaye discounted the report, labeling it as “false” and a desperate attempt to take the shine off the US$30 million project that had given decent housing to people in the affected communities.

He indicated that all minor structural defects, which came to the notice of the company, were reported to the contractors and these had been fixed.

The Minister of Lands and Natural Resources, Mr. John Peter Amewu, officially inaugurated it on January 24.

Mr. Acquaye stated that the township, situated on a 217 acre gentle slope of land, “stands out and has been appreciated by the people of Ayanfuri and the beneficiary communities”.

He said through its Edikan Trust Fund, which had been attracting US$300,000.00 annually, PMGL remained on course to opening up the area and improve on the living conditions of the people.

It has also awarded scholarship to many students to assist them pursue academic careers.
GNA/www.newsghana.com.gh

Jollof And Afrobeat Festival Will Be Celebrated Annually – Rafarazzi