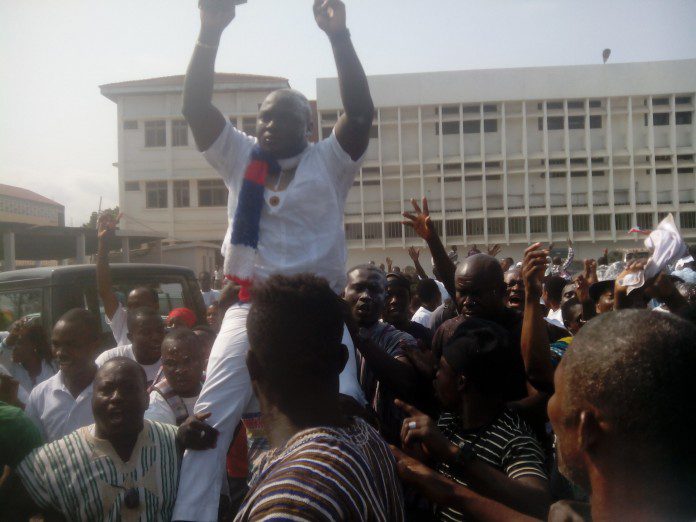 Philip Addison and Nii Adjei Tawiah were shocked to the marrow after the votes were counted and the results were given, this seems to suggest that the outcome of the elections was far below their expectations considering their ?social status? in the NPP party.
The outcome of the election indicated that out of the 808 total registered delegates, only 440 delegates voted, Lawyer Addison and Nii Adjei pulled 22 and 19 votes respectively, 6 votes rejected while their main contender, Valentino Nii Noi Nortey, the Chairman of the constituency pulled 393 emerging as the winner of the Klottey Korle constituency.
Meanwhile earlier developments were that Lawyer Addison and Nii Adjei attempted to mar the elections by boycotting the entire exercise which almost spoilt the day, whereas some indications were that they withdrew from the race.
Later in the day, it was alleged that Lawyer Addison and his cohorts were sending text messages via phone to the delegates asking them to boycott the election.
That resulted in almost half of the registered delegates not turned up, the Electoral Commission reps, despite all the higgledy-peggledy at the party?s headoffice, were also busy preparing the election materials for voting to begin.
Voting began at around 11am forenoon instead of the official time 8am which was announced to the various parties involved.
The Klottey Korle constituency, prior to the primaries, was being characterized with controversies upon controversies over some allegations of fraud.
The matter was dragged to the High Court seeking an application for injunction aimed at stalling the election.
The plaintiffs ? Juliana Briandt, George Attor Williams, Mary Crentsil and three others ? had filed the motion at the court citing the NPP and Valentino Nii Noi Nortey as first and second defendants in the suit respectively.
They were seeking a declaration that Nii Noi Nortey, the party’s constituency chairman, who is contesting the seat with Lawyer Philip Addison, had presented a fake University of Ghana certificate to the party’s Vetting Committee.
According to the plaintiffs, Nii Noi Nortey acted fraudulently when he declared and submitted to the NPP as part of his forms for adoption as the party’s parliamentary candidate for the 2016 general elections, that he held a Bachelor of Arts (Hons) Political Science Degree (2nd class upper division) awarded by the University of Ghana.
But Justice Ofori Atta in a ruling, dismissed the application after having listened to what he described as ‘interesting arguments’ by both parties.
He said the plaintiffs had failed to prove how they would be affected if the court did not grant the injunction.
This was an entirely a ?bottle-neck? approach by opponents of the young politician Nii Noi Nortey to blur his political career but it backfired.