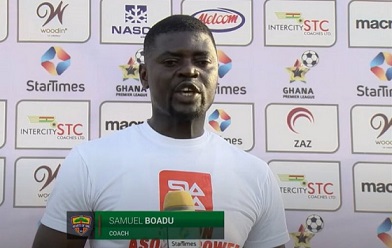 Samuel Boadu has said goodbye to Accra Hearts of Oak after both parties parted ways.

Hearts on Tuesday announced the termination of Boadu’s contract together with his two assistants, Hamza Mohammed and Eric Amponsah.

Hearts, in a statement, explained that Boadu’s sacking was because the club needed a new direction and to ensure broader objectives were met.

Boadu in a social media post said: ”To a club and supporters I call family, to a chair I called father, to a management I called brothers and to players I called friends.

”Thanks for the glorious moments we shared together… I am glad we won together and achieved the unimaginable in two years. See you around soon, Phobiaaaa.”

Samuel Boadu, who joined in March 2021, has won a league title with the Phobians, two FA Cups, one President’s Cup, and the Super Cup.

Hearts Supporters complain over lack of recognition by Board of Director