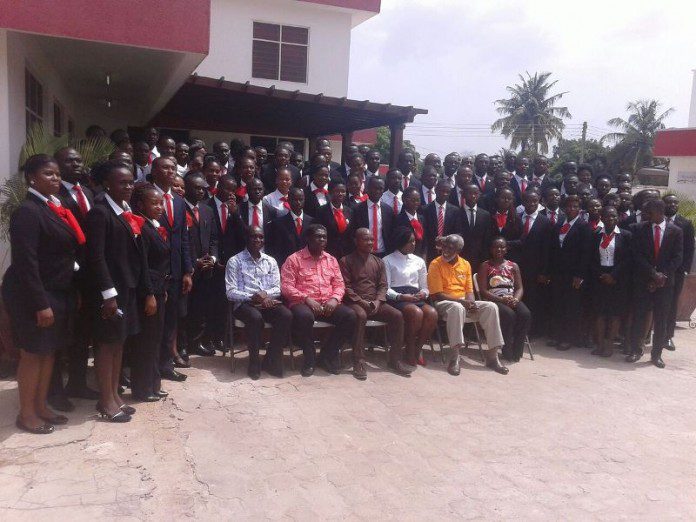 The ceremony was also meant to give the Group an opportunity to build an army of quality talents to manage several facets of its subsidiaries.

Mrs Abena A. Adu-Larbi, Centre Manager of the Academy explained that the Academy is a sanctuary for learning and career development and is offering people who had completed their national service an opportunity to work with Group.

She said the trainees would go through a nine- month classroom and on-the-job training for three trimesters and later be placed on specialised talent development paths to equip them for supervisory roles within the Group.

Mrs Adu-Larbi said after going through these processes, the trainees could get the chance to work with the Group including Beige Capital, Beige Assure, Mobacom, adding that the Group wants to employ about 5000 by the end of 2017.

The 110 inductees would be taken through variety of programmes including Managing Work Commerce, Corporate Grooming, Building Self Confidence, Self Etiquette, Basic Leadership Role, Values and Ethics in Business.

Professor Stephen Adei, Board Chairman of the BEIGE Group speaking at the ceremony told the inductees to enhance their capacity, be cautious of their character to their clients and care for their customers who are their main stakeholders.

“Never compete with anyone in your career but corporate with one another for a success; rather always compete with yourself so that you will improve in your operations,” he said.

Prof Adei advised the inductees to work with integrity and build trust in their customers and employers to succeed.

He noted that many youth who wish for the opportunity to develop their skills, do not get the chance, hence the need for the beneficiaries to take advantage of it to excel.

Mr Ras Mubarak, Chief Executive Officer of the National Youth Authority said globalisation has broken down barriers making it possible for citizens of many countries to apply for jobs in Ghana; therefore it is necessary for the Ghanaian youth to work harder and learn from their failures.

He commended the Group for their contribution to reduce the graduate unemployment rate in the country.

Mrs Louisa Laryea, Chief Operating Officer of BEIGE Capital, another financial subsidiary of the Group also advised the inductees to be disciplined because they would not succeed without discipline no matter how good or intelligent they are.

She said the Group only works with people who are disciplined.

“You have to be disciplined to keep the job,” she stressed.