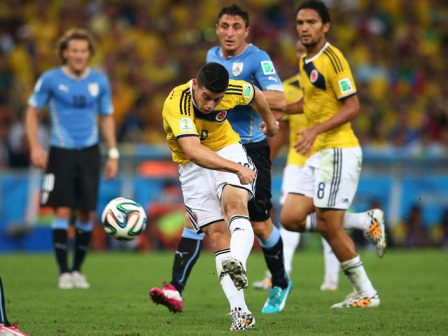 Suarez-less Uruguay have been kicked out of the 2014 FIFA World Cup by Colombia courtesy 22-year-old James Rodriguez’s two goals which has propel his side to it first ever trip to the quarter final stage of the global soccer fiesta.

With the suspension of Luis Suarez dominating the tabloids ahead of this last 16 fixture, the game needed an outstanding performer and Monaco’s offensive midfielder James Rodriguez defined the meaning of brilliance with his breath-taking 180 degrees left footed thunderbolt which has overtaken Van Persie’s fly header as the goal of the tournament so far.

The game was a true reflection of a South American soccer battle which is normally characterized by plenty of skills, speed and crunchy tackles.

But the moment of brilliance came in the 28th minute when James Rodriguez changed the entire atmosphere at the Estadio do Maracana with the gunning goal of the tournament.

A long ball was looped into the Uruguay eighteen box by Abel Aguilar, returned with a header by Alvaro Pereira only to find Juan Cuadrado outside the box who found the dreaded Rodriquez with a cool header outside the box- with his back facing Muslera’s post, the young Colombian controlled the ball on his chest and turned a-hundred-and-eighty degrees before hitting a magnificent volley that rocketed into the roof of the net.

The goal had power, vision, technique and one which can easily pass muster as the poster goal of the entire 2014 FIFA World Cup tournament.

In the 50th minute Rodriguez anchored a wonderful team goal. With several passes outside the box, the ball found Fiorentina’s Juan Cuadrado who rose majestically to direct a heading pass towards James Rodriguez to fire home his second for the Colombian’s.

Colombia’s only news that preceded this tournament was the absence of their star man Radamel Falcao but the country has found a good international fame in Rodriguez with his extra ordinary skill placing Colombia squarely in the soccer spotlight.

Colombia whose last trip to the round of 16 was crushed by the then dreaded Indomitable Lions will meet the host Brazil on Friday.

Kenya to have higher temperatures, less rainfall amid climate change