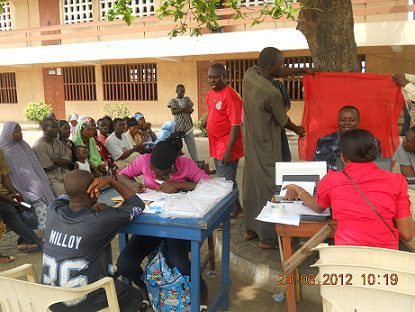 The youth of Teshie in the Zebilla Constituency of the Upper East Region insisted on Wednesday that all persons, including those categorised as vulnerable groups, join the queue to cast their votes.

This is in contravention of the directive that the aged, the infirm, pregnant women and People With Disabilities (PWDs) should be allowed to vote without staying long in queues during today’s elections.

Security presence could not deter the youth who would shout at polling officials and party agents whenever any of such vulnerable persons was being assisted to vote out of turn.

At the Teshie Market polling station the aged had to wait in the queue till their turn came, as the youth demanded fairness for all.

That was the polling station where the incumbent Member of Parliament (MP), Mr Cletus Avoka cast his vote.

At 09:36 hours, 68 people had voted at Soogo primay A near Teshie. Even though voting was going on smoothly, the process was slow and so resulted in long queues.

Meanwhile, confusion broke out at the Zebilla Primary A Polling Station when as at 0800hours voting had not started.

Whilst EC officials were still setting up the stage, they noticed that the bar code of the register was broken, hence the difficulty to begin work in good time.

Besides, the security personnel posted to that polling station did not report on scheduled time.

Some party agents present challenged some names marked to indicate that those persons had already cast their votes.

However, an official from EC explained that the marked names were special voters and so they could start work. This instruction incurred the wrath of the already tensed voters.

Also at the same polling station, some names on the reference list did not tally with the photos at hand.

Mr Benjamin Aruk, the Presiding Officer for that constituency, in consultation with the Returning Officer asked that such voters should be returned

NHIA introduces instant healthcare for aged 70 and above