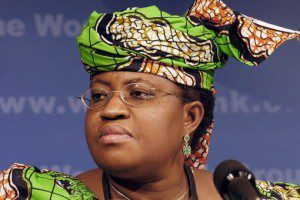 Last week, I was privy to a little note written by Coordinating Minister of the Economy and Minister for Finance, Ngozi Okonjo-Iweala, in which she summarized that recent setbacks will not undo Nigeria?s progress.

While I am not in the habit of just attacking government officials, I will not just disagree with the Minister but draw her to some realities, not just her but our ‘leaders and dealers’.

In her note, she spoke of “Allegations of unremitted oil revenues, and leadership changes at the central bank, having attracted a great deal of the wrong kind of attention to Nigeria.”

The fact is loads of issues are attracting the wrong kind of attention, ?and really there’s little being done by leadership because they are insulated and for a fact the populace are stuck in their docile train.

I will spare us the agony of detailing most of the issues. Kindly follow me…

On Sanusi, she said though there was consternation in the markets following the?suspension of Lamido Sanusi, governor of the country?s central bank, a sense of normality is gradually returning. At the Nigerian Stock Exchange, the All Share Index dropped by about 3 per cent in the days following Mr Sanusi?s suspension but has since recovered.”

“The exchange rate is stabilising. Although foreign exchange reserves have dropped slightly to $39bn, this still provides a healthy level of import cover by International Monetary Fund measures.”

She added, “The fundamentals remain strong. Inflation is at 8 per cent, down from 12 per cent at the start of 2012. The fiscal deficit is 1.9 per cent of gross domestic product and government debt is under control at 21 per cent of GDP. The IMF expects the economy to grow by 7.3 per cent in 2014, up from 6.2 per cent a year earlier.”

The Prime Minister further explained, “The government has pledged to put aside a portion of oil revenues to help insulate the economy from external shocks. We will be vigilant against the risk of the economy overheating. I will ensure that fiscal policy remains tight…”

She said, “In the meantime, we must not forget how far we have come in Nigeria. The economic reforms we fought hard to achieve are having positive effects. I have argued previously that, while we must pursue and punish those engaged in corrupt acts, building strong institutions is the most enduring way to tackle corruption in a systemic way.”

As I tried to make sense of that really short explanation of hope to over a hundred million Nigerians, the Minister for Interior, Mr. Abba Moro, speaking on the Nigerian Immigration Service recruitment tragedy said 520,000 applicants participated in the NIS recruitment exercise across the country.

The minister truthfully, acknowledged that only 4,556 would be recruited at the end of the exercise, based on the available space.

I will take the Minister’s figures, not one more, not one less. How sad, how shameful, my maths is bad, but for a N1,000 per candidate sum it up.

Seven people lost their lives at the National Stadium, Abuja. There was a stampede in Rivers, one died in Niger; two pregnant women were reported dead in Benin, others were injured.

According to Mr. Minister ?The applicants lost their lives due to impatience; they did not follow the laid down procedures spelt out to them before the exercise. Many of them jumped through the fences of affected centres and did not conduct themselves in an orderly manner to make the exercise a smooth one. This caused stampede and made the environment unsecured.?

I watched graduates sit on the floor; beat, harassed and treated like ‘goats’. I listened as a large number of these graduates on camera ‘murdered’ English…”I knows government doesn’t caring”, “we are a graduate” and more such suicidal phrases.

I bled because half of the numbers in each center where above 35 and even when less were least qualified to be immigration personnel, but who cares Ngozi says we are making progress, Moro says lives were lost due to impatience and that’s all, we are indeed making progress.

What Ngozi fails to understand and we don’t understand as a people, is that we are only victims of ourselves as a nation.

These crop of followers, don’t know there’s peoples’ power. If only all those young folks in the Abuja stadium, and in Minna simply marched towards the Villa, or National Assembly or to their various governors, the story would have been better.

How many times I have said we are just na?ve, in today’s Nigeria, no Minister’s kid is looking for a job, no governor’s brother was looking for an immigration job. No local government chairman has issue with getting his sister a job.

The political class, don’t know that there’s no electricity, because rimi road, adeoye crescent, and Mbakwe close all have houses powered by generators.

For those that have lost someone, if you really understand that all is not well with Nigeria, let’s join hands in giving our leaders a wake-up call. If not, they will continue to deceive us, for how long–only time will tell.