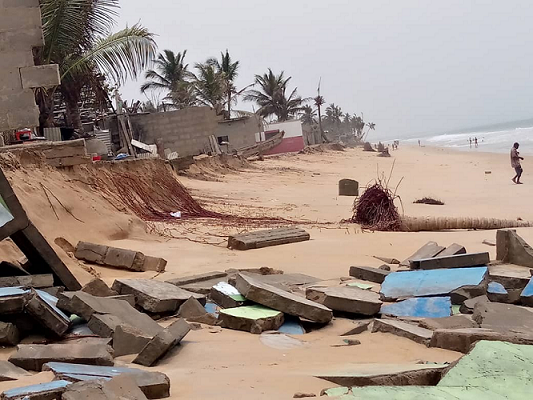 Residents of Agavedzi and Salakope in the Ketu South Municipality are living in fear over the possible sweeping away of their homes by the raging sea.

Days of tidal wave attacks recently brought big trees and buildings to the ground in the two communities.

A visit by the Ghana News Agency (GNA) to the area revealed a disturbing scene, where the people could be said to be practically living with the sea as tidal waves eroded the ridges and levelled the sand dunes leaving no shoreline, thus, allowing free flow of the sea in and out of homes.

Some residents, who spoke to the GNA said they lived in constant fear without knowing when and at what time the sea would deal a final blow to them by wiping up the remaining homes.

“We live in constant fear. The sea comes in and takes our belongings and collapses our buildings at will. Look at this cement wall.

It’s just hanging and waiting for another visit by the sea to fall. This is how it has always been and we are at where we are today. Just a few houses left,” Madam Ablorshie Alobia who lives at Agavedzi Alobiakope lamented.

“It’s on and off. It can strike today, disturb for a while and go back only to return in two weeks to resume its destruction. This is really a worry to us,” Mr Kofi Edzie Aborrika, another resident said.

Torgbui Emmanuel Anomoo Tettey, Salakope Chief fisherman, said their pleas to the Assembly to construct a sea defense wall to protect them proved futile, and concluded that any further calls on the Assembly would at best be “pouring water on a duck’s back.”

He said community members had rather resolved to stage a demonstration to tell the world of their plight.

Mr Elliot Edem Agbenorwu, Municipal Chief Executive for Ketu South, said he shared in the pains and frustrations of the people losing their homes and livelihoods due to the sea’s attacks.

He said the Assembly made requests to the central government for about 83 million dollars funding to allow for extension of the current phase 1 of the sea defense project (about 4.2km) around Agavedzi-Blekusu to reach Aflao to save coastal communities in the Municipality from possible extinction in future.