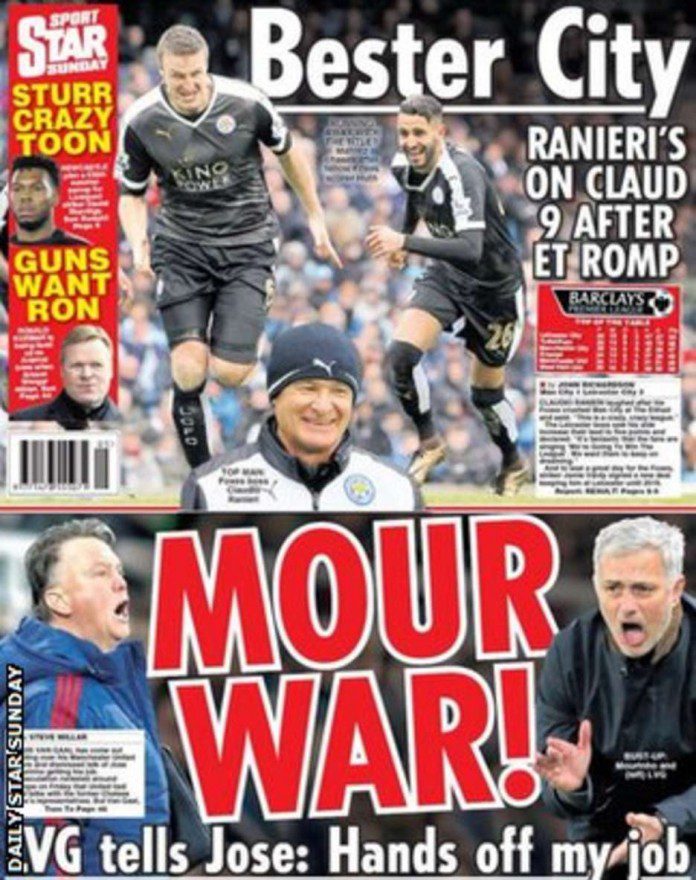 Pep Guardiola has made Barcelona’s ex-Liverpool striker Luis Suarez, 29, his main target when he takes over at Manchester City. (Sunday Mirror)

Barcelona striker Neymar, 24, and midfielder Sergio Busquets, 27, are both targets for Guardiola as he plans a £150m double swoop. (Mail on Sunday)

Daily Star Sunday back pageFormer Chelsea boss Jose Mourinho is “confident” he will be Manchester United manager by the start of next season. (Independent on Sunday)

However, former Manchester City and Chelsea striker Sturridge is considering his future at Liverpool and wants a move back to London.(Sunday People)

A downturn in the global stock markets, along with Manchester United’s poor form, has seen £345m wiped off the club’s value. (Independent on Sunday)

Paris St-Germain midfielder Ezequiel Lavezzi, 30, is set to turn down Chelsea and join Chinese side Shanghai Shenhua.(Sun on Sunday)

Sunday Express back pagePep Guardiola’s dad has branded the Premier League as “boring” and 84-year-old Valenti Guardiola added that it was little more than constant “long balls and running”. (Sunday Mirror)

Chelsea striker Loic Remy, 29, is a target for Chinese Super League side Hebei Fortune.(Daily Star on Sunday via Football Insider)

Crystal Palace co-owner Steve Parish has revealed that the club did consider a deal for Remy in the January transfer window.(Croydon Advertiser)

Meanwhile, Remy’s Chelsea team-mate Eden Hazard, 25, has said he would like to play under new Real Madrid coach Zinedine Zidane at some stage of his career.(London Evening Standard)

Bayer Leverkusen goalkeeper and Liverpool target Bernd Leno, 23, has hinted that he might be willing to move to the Premier League. (Metro via Sport1)

Under-fire Valencia coach Gary Neville has denied that the last few days have been the worst experience of his football career and says he is confident he can turn things around at the La Liga club.(ESPN)

Juventus boss Massimiliano Allegri is being considered by Chelsea to replacement Guus Hiddink.(Mail on Sunday)

Stoke defender Ryan Shawcross, 28, has told England rugby union coach Eddie Jones to “stick to what you know” after he made disparaging remarks about the “old Stoke City”.(Daily Express)

Simpson’s team-mate Riyad Mahrez was speechless after the win that took Leicester six points clear at the top of the Premier League. He wrote onInstagram: “I have no words.”

Former Manchester United and England defender Rio Ferdinandtweeted his admiration for the way Leicester are dealing with the pressure of being on top of the table.

Bastian Schweinsteiger was one of many Manchester United players onTwitter marking the 58th anniversary of the Munich air disaster, when eight ‘Busby Babes’ were among 23 passengers who lost their lives coming back from a European Cup game in Belgrade.

Leicester-born Keval Nakeshree was smiling after the Foxes beat Manchester City on Saturday. He is on course to win £33,000 from a £5 bet he placed on them to win the Premier League. (Gloucester Citizen)

Eguavoen Confident In Black Stars; Says They Are Not Pushovers