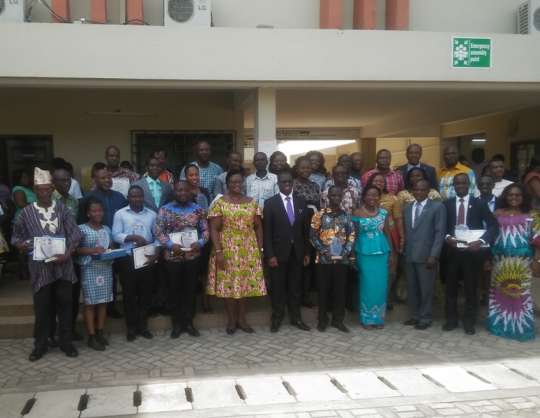 Seventeen dedicated and hardworking staff of the University of Cape Coast (UCC) have been rewarded for their significant contributions towards the growth of the institution.

The Annual Staff Awards were instituted to inspire performance and inculcate a competitive spirit among staff to be able to give of their best for the growth and development of the University.

The awards, which were grouped into three different categories, Junior Staff, Senior Staff and Senior Members, saw the awardees receiving a shield, certificate and a cash prize of GH¢3,000.

Professor Joseph Ghartey Ampiah, the Vice Chancellor of the University, congratulated the awardees for the good job and urged them to keep working hard and continue to shine in their respective corners.

He said the University would forever recognise their efforts.

‘’Endeavour to be an example to all, and continue to raise the bar higher, eschew laziness, indifference and lateness including all negative attitudes towards work and you would always be made proud,’’ he said.

He said the awards committee received a total of 76 nominations out of which 17 were selected for awards compared to 36 and 10 respectively last year.

The VC encouraged the committee to increase its publicity to attract more entries to give deserving staff equal opportunity to be nominated, compete and select the best for the awards.

He encouraged those who did not receive any award not to lose hope or be discouraged but rather work tirelessly and harder.

‘’let’s all work together to build University of Cape Coast and step back and admire our success in the future,’’ he added.

Speaking on behalf of the awardees, Mrs Dankwah expressed gratitude to the University for recognising their hard work and urged other staff to do their best in whatever position they held.