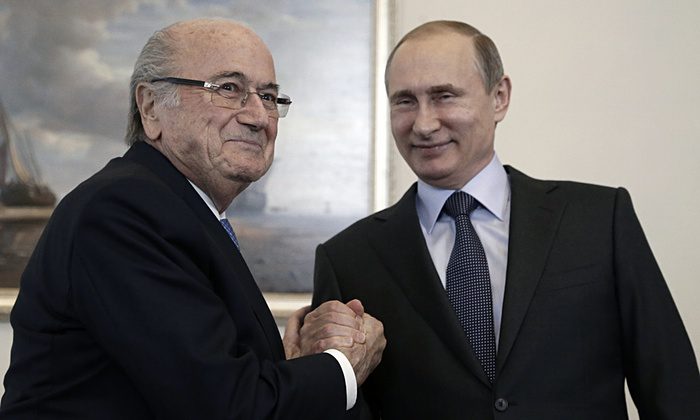 Sepp Blatter deserves a Nobel prize for his stewardship of Fifa, Vladimir Putin said in an interview aired by the Swiss broadcaster RTS.

On Saturday, at a meeting with Putin in St Petersburg, Blatter said that Fifa, facing a major bribery scandal, had passed a resolution offering full support for holding the 2018 World Cup in Russia.

Russia?s president said of his Fifa counterpart: ?We all know the situation developing around Mr Blatter right now. I don?t want to go into details but I don?t believe a word about him being involved in corruption personally,? he said. ?I think people like Mr Blatter or the heads of big international sporting federations, or the Olympic Games, deserve special recognition. If there is anyone who deserves the Nobel prize, it?s those people.?

In June, Blatter announced he was standing down following a bribery scandal being investigated by US, Swiss and other law enforcement agencies that plunged Fifa into the worst crisis in its 111-year history. Officials have been indicted, although Blatter himself has not and he denies any misconduct.

The scandal has cast a cloud over the World Cups in Russia and Qatar but Russian officials have dismissed any suggestion they could be stripped of the tournament.

In May, when the scandal broke, Putin criticised the US investigation into Fifa as meddling in matters outside its jurisdiction. He rekindled that criticism in the interview broadcast by RTS and widened it to include Britain, noting that those two countries had bid to host the 2018 and 2022 World Cups.

?The way there is this fight against corruption makes me wonder if it isn?t a continuation of the bids for 2018 and 2022.?

An economic crisis has forced cutbacks in Russia?s World Cup preparations but Putin and Fifa officials have said this will not affect Russia?s ability to host the tournament.