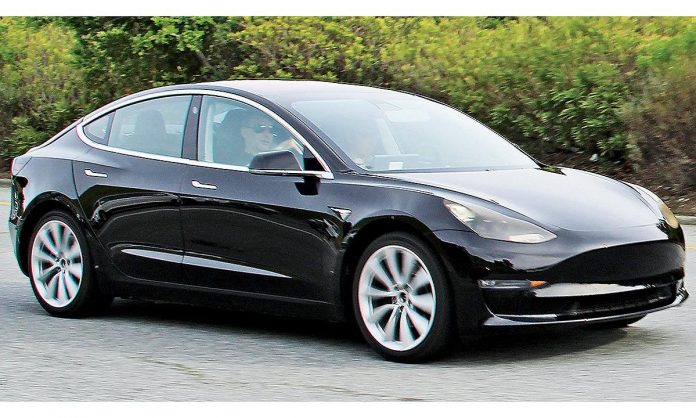 Tesla Inc. delivered just enough vehicles in the second quarter to meet its first-half sales guidance, with production slowed by a temporary shortage of battery packs.

The maker of electric cars and energy-storage devices shipped more than 22,000 cars and SUVs in the period, compared to a record 25,051 vehicles in the first quarter, according to a statement released Monday. With the results released Monday, Tesla’s first-half sales were at the lower end of its prediction of 47,000 to 50,000 units.

The sales report comes as Tesla enters a critical quarter. The Model 3, set to begin production this week, is key to Tesla’s goal of reaching mainstream consumers with a smaller, more affordable electric sedan. With prices slated to start at $35,000 before any incentives or options, the Model 3 is the youngest publicly traded U.S. automaker’s best chance at mass-market penetration.

Sales included 12,000 Model S sedans and 10,000 Model X crossovers. The total was in line with the lower of two analyst estimates in a Bloomberg survey but trailed their 22,900-vehicle average.

Meanwhile, Tesla’s mission-critical Model 3 will start production on Friday before beginning a rapid ramp-up targeting a rate of 20,000 a month in December.

“Expecting to complete” the first car Friday, CEO Elon Musk wrote in Twitter post, adding that it passed all its regulatory requirements for production two weeks ahead of schedule.

The company will hold a handover party for its first 30 customers of the Model 3 on July 28, he said in a separate post. Tesla aims to produce 100 of the cars in August and more than 1,500 in September in its push to achieve its year-end goal, Musk said.

The Model 3, the company’s most affordable car yet, had been expected to begin production in July, but there had been little news on how the preparations at Tesla’s factory in Fremont, Calif., were progressing. When a Twitter follower of the CEO asked him last week to “please have mercy” and give more information on the release, Musk responded cryptically that he would offer “news on Sunday.”

Investors have pushed up shares of Palo Alto, Calif.-based Tesla 72 percent this year in anticipation of the Model 3. After an initial boost, shares fell 2.5 percent to close the shortened holiday trading session on Monday at $352.62.

The company now makes two all-electric models: the Model S sedan and Model X crossover. The Model 3, which is slated to start at $35,000 before options or incentives, is the culmination of Tesla’s 15-year-quest to reach mainstream consumers with a smaller, more affordable electric car.

Tesla first unveiled the Model 3 in March 2016 at a late night party at the company’s design studio in Hawthorne, Calif. The company reported last spring that 373,000 people have placed $1,000 deposits for the vehicle and hasn’t given an updated reservation figure in the year since. Model 3 reservations “skew young and urban,” Jon McNeill, Tesla’s president of global sales and service, said last year.

The company delivered 25,051 vehicles in the first quarter and aims to make 500,000 in 2018 and 1 million in 2020. Tesla is expected to release second-quarter sales figures Monday.

Source: Autonews
Send your news stories to newsghana101@gmail.com and via WhatsApp on +233 244244807 Follow News Ghana on Google News