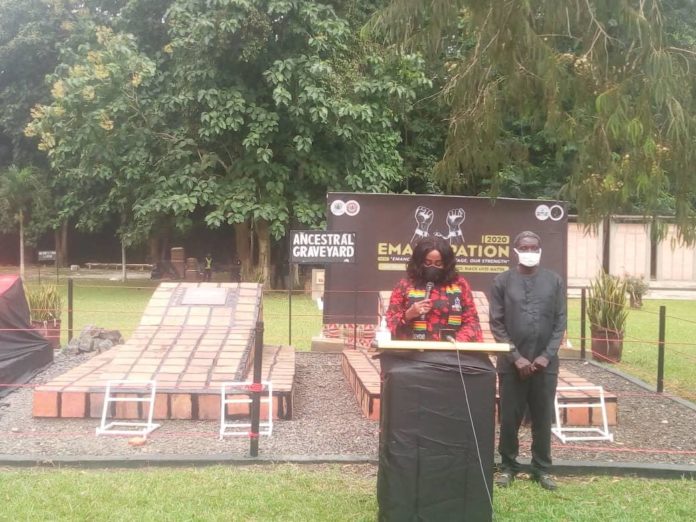 The 22nd edition of the Emancipation Day celebration was on Saturday held at Assin Manso in the Assin South District of the Central Region, without the usual pomp and pageantry because of the outbreak of the Coronavirus (COVID-19) pandemic.

The international event is observed on August 1, every year to commemorate the resistance and liberation of Africans in the Diaspora from chattel slavery and human rights violations.

The Assin Manso community hosts the event at its Memorial Park and later participants mostly Africans from the Diaspora visit the Nnonkosuo (Slave River) where the slaves from the Northern parts of the country were taken for their last bath before being sent to the Cape Coast and Elmina castles to be transported overseas.

The Town also has the slave market where slaves were sold, historical edifices and the Reverential Garden hosting the tomb of three renowned African slaves including Carson and Crystal whose remains were transported overseas and have been reinterred there.

This year’s national celebration was held on the theme: “Our Heritage, Our Strength, with a sub-theme: ‘Leveraging Our Resilience; Black Lives Matter”.

It was organized under the auspices of the Ministry of Tourism, Arts and Culture in collaboration with the Ghana Tourism Authority, Assin South Assembly and the traditional authorities.

Unlike the usual fanfare, pomp and pageantry amidst wonderful cultural display of the rich Ghanaian culture, this year’s celebration was solemn and brief.

A mini durbar of the chiefs and people of Assin Apimanim was held amidst the strict adherence to the Covid-19 social distancing protocols.

In remembrance of the gallant Africans who died during the trans-Atlantic slave trade, wreaths solemnly laid on the tombs to immortalise their souls and resilience for the inhumane act of slavery, oppression and injustice meted out to them.

Rabbi Halevi kohain, Executive Secretary of the PANAFEST Foundation, laid on behalf of Africans in the Diaspora.

Addressing the gathering, Mrs Oteng Gyasi, said the celebration was an opportunity to learn about the slave trade and find ways of turning the tragedy into something positive for the country and the entire continent.

As Ghana reconnects with its descendants in the diaspora, Mrs Oteng Gyasi who doubles as the Prestea Huni-Valley parliamentarian, called for a sober reflection on the heroism, courage and legacies of Ghana’s freedom fighters who refused to remain in chains.

“The relevance of the Day across the world may be lost on us unless we grasp the full impact of the trans-Atlantic Slave Trade on Africa. By so doing, we would also appreciate the struggle and the humiliation of the enslaved African in the new world over three and half centuries the slave trade persisted,” she noted.

The Tourism Minister charged Africans not to be separated by the artificial barriers, but forge ahead in unity, peace and harmony to accelerate rapid socioeconomic development.

The strength of Africa’s unity, according to her, must invigorate all to strive both individually and collectively and challenge all forms of prejudices against the black race.

To this end, “we must create human communities which provide space and opportunities for almost all members to flourish, thus building community cohesion within our continent,” she added.

Mrs Oteng Gyasi reminded all of the persistent police brutalities and decriminalization of the judicial system against African American males and noted that “the recent killing of Mr George Floyd pointed to an enduring, pervasive and bigoted world view fueled by feeling or racial superiority among sections of the Caucasian population.”

Mr. Akwasi Agyemang, the Chief Executive Officer for the Ghana Tourism Authority (GTA), said the Emancipation Day was a moment of rebirth which called for more self-introspection and reconciliation among Ghanaians to grow the nation for all.

He celebrated the resilience of the African ancestors who lost their lives during the trans-atlantic slave trade and kicked against all forms of diversionist tendencies to help fight poverty with a unified front.

Mr. Derick Owusu Ambrose, the Assin South District Chief Executive was worried that despite the tremendous strides made by the black race, it was not accorded the needed respect and dignity it deserves.

Therefore, he challenged Ghanaians to walk the talk of peace with dedicated passion, commitment and a sense of responsibility to maintain national peace as the nation geared up for December 7 poll.

Nana Dr. Ohemeng Aware, Acting President, Apimanim Traditional Area, eulogised all black ancestors who died and made particular mention of Barima Kwame Nkyi VII of blessed memory who was the Paramount Chief of Assin Apimanim and Chief of Assin Manso who spearheaded the celebration of Emancipation.