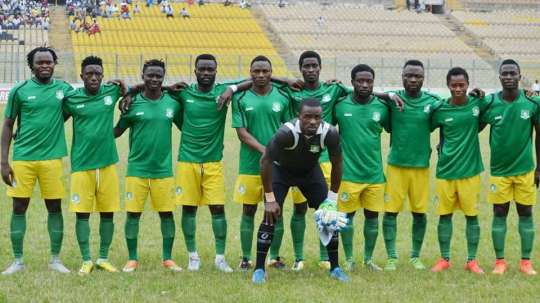 Aduana FC’s midfielder Adom Frimpong has said he intends to end this season’s premier league with 12 goals and eight Man of the Match awards.

“I have started the season well, though my performance cannot be compared to that of last season.

“I still have the conviction that, I would achieve my personal target of scoring 12 goals and winning at least eight MVP awards,” he added.

Adom Frimpong was speaking at a post match interview at the Nana Agyemang Badu I Sports Stadium in Dormaa Ahenkro after the game between Aduana FC and Samartex FC.

It ended in two goals apiece. The game saw him winning the man of the match in a Match Day three encounter.

He said although the game was tough his team showed character without which they could have lost.

“As compared to last season, it was extremely difficult to equalise after a goal’s deficit.

“Going down with two goals and rising up to redeem all these goals shows a lot of character, ” he indicated.

On the failure by skipper Bright Adjei to convert a penalty, he explained that the skipper was confronted with only two choices either to score or to blow the chance away in that penalty shoot out.

“When he lost the penalty, he kept motivating and encouraging us to press forward, which helped us to equalise,” he added.

Frimpong said he was comfortable and convenient playing together with midfielder Douglas Owusu Ansah, whom he had played for a long time in Kumasi and in Kotoko stressing the absence of Eric Kwakwa doesn’t appear much of a problem to him.

“You need to take a short time to study the person you play side by side as player, “he added.

GBA President Sets To Meet Ghanaian Boxers Based In America