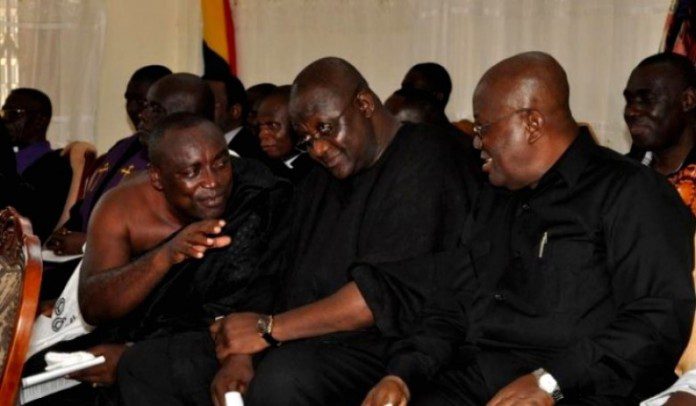 Having already masterminded the suspension of the party’s National Chairman, Paul Afoko, with plans underway to suspend 2nd vice chairman, Sammy Crabbe and General Secretary, Kwabena Agyei Agyapong, the twice defeated presidential candidate seemed not satisfied and has kick start processes that will lead to their eventual dismissal. While it was the belief of Nana Akufo-Addo that the removal of Paul Afoko and threats of disciplining other dissenters will whip all party bigwigs in line and kowtow to his whims and caprices, party sources say, the opposite is the case.

Following the purported suspension of National Chairman Paul Afoko, (which he has since described as illegal), Kwabena Agyapong and Sammy Crabbe have openly criticized the manner under which the beleaguered chairman was suspended, with the 2nd vice chairman vowing not to honor any meeting called by acting Chairman, Freddie Blay.

This has led to some Nana Akufo-Addo loyalists petitioning the Disciplinary Committee of the NPP for the suspension of the General Secretary and 2nd Vice Chairman, Sammy Crabbe, who has sworn to use all legitimate means to stop any attempt to subject him to the treatment meted to Paul Afoko.

According to party sources, Kwabena Agyapong, who met the DC in a marathon meeting that lasted over 8 hours last week, is also expected to meet the DC again this week for a final decision to be taken on him. On his part, Sammy Crabbe, who is said not to have attended meetings so far called by Freddie Blay, is to be invited by the DC this week.

The source added “their suspension will not end there; they will all be dismissed from the NPP possibly at the December 19 Sunyani congress. Nana is keen on seeing them off.”

Mr Afoko, Sammy Crabbe and Kwabena Agyapong have all been linked to former President Kufuor, who aficionados of Nana Akufo-Addo have accused of being in bed with President Mahama to deny the twice defeated presidential candidate victory in the November 2016 presidential election.

Without directly making reference to Afoko, Sammy Crabbe and Kwabena Agyapong, a deputy Communication Director and staunch Akufo-Addo lapdog, Anthony Karbo, in a radio interview last week, said those who are “carpetbaggers” fighting the interest of the party are the persons who are currently being suspended by the party.

Confirming ongoing plots to oust the supposed Akufo-Addo internal nemeses, a founding member of the NPP and former National Chair, Haruna Esseku revealed that the NPP is keeping an eye on its suspended Chairman (Afoko) because he is still scheming within the Danquah-Busia-Dombo family, a situation he said could get him dismissed completely.

“Mr Afoko is still doing some wrong things, but maybe he would reform, or maybe he would rather go worse,” Mr Esseku told Ekow Mensah-Shalders on Class91.3fm’s Executive Breakfast Show on Tuesday.

“There still remains the final decision to be made as to whether Mr Afoko would be called back or completely dismissed,” the 81-year-old former chairman said.

According to Mr Esseku, who was also suspended at a point while serving as national chairman, the party had no option than to show Mr Afoko the exit for disobeying the elders several times, “He is still a member, but he is on suspension,” Mr Esseku said, adding: “We are watching to see what we will do while he is still on suspension.”

The biggest opposition party will on December 19, 2015, go for an extraordinary congress in the Brong Ahafo regional capital, Sunyani, to take stock of what party officials say “happenings in the party over the last one year, and also plan towards election 2016”.

While National Organizer of the party, John Boadu has refuted assertions the Sunyani congress will be used to finally show Paul Afoko the exit, deep throat sources have hinted The aL-hAJJ “the congress will mark the end of Afoko, Sammy Crabbe and Kwabena Agyapong’s association with the NPP.”