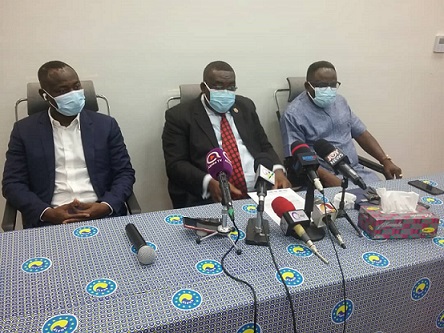 The Management of Alpha Lotto Limited has stated categorically that Alpha lotto limited is not part of fraudulent or Illegal lottery operators in the country.

According to the management, Alpha Lotto Limited is licensed by the NLA to operate VAG 5/90 fixed ODDS GAMES and does not operate the shortcode “959”, intended for NLA’s 5/90 games.

Alpha Lotto limited operate on its independent platform and market through shortcode *896#” they said.

Speaking at a press conference organised by Alpha Lotto Limited, on February 17th, 2021, Dr. Ato Conduah, responded to the NLA press statement issued by the Public Relations Unit 0n 13th February 2021, to the effect that ” the only operational and functional official shortcode of the NLA is “959” . Any other platform operating digital is fraudulent and illegal “.

The management, therefore, wishes to state that, under the terms of registration and licensing of private sector operators for VAG lottery operations, licensed operators are required to market their lottery products using digital devices as NLA has banned the physical, writing of lottery from a booklet or paper, in order for NLA to electronically monitor VAG lottery licenses’s operations.

Dr. A to Conduah, furthered that Alpha Lotto Limited received its license following two month NLA Board sanctioned negotiations led by the Director-General between NLA and the Ghana Lotto Operators Association (GLOA) in October 2019, to restore the licenses of private sector operators, who previously held VAG lottery licenses before the take over of the VAG’s lottery operations by NLA.

The management of Alpha Lotto Limited has assured the Ghanaian lotto public that its operations are illegally sanctioned by the NLA under VAG Act, Act 844 (2012), and there is nothing fraudulent or illegal about its operations.

“The allegation made against Alpha lotto by the NLA’S public Affairs unit is regrettable, and thereby misconceived, malicious and uninformed”, they stressed.